India is a land of religion, beliefs and faith and numerous festivals are celebrated all through the year in different states of our country. Attukal Pongala is a festival that is celebrated in the famous Attukal Bhagavathi temple in Thiruvananthapuram, the capital city of Kerala. The annual Pongala festival is celebrated with great enthusiasm at the temple and is the largest annual congregation festival of women where they offer their prayers to the Devi for blessings.

The Attukal Devi Temple is one of the most ancient temples of South India and is also known as the Sabarimala of the Women as they form the major part of the devotee. The temple was built by the local family many years ago as the family had a vision of the Goddess in the dream. The Goddess is worshipped as the Supreme Mother, Attukal Amma who is believed to be the creator of all living beings and is also the preserver and the destroyer of all. During the festival about 3.5 million people participate and offer dedication, devotion and obeisance to the deity of the temple.  Attukal Pongala is considered to be the biggest festival in the city.

Attukal Pongala is a ten day long event which starts from the Bharani day of the Malayalam month of Makaram Kumbham and ends with the sacrificial offer, which is known as Kuruthitharpanam at night. The ninth day is the most important day when the famous Attukal Pongala Mahotsavam takes place. Women from all castes and creed from the state of Tamil Nadu cook pongala, a rice porridge with jaggery and coconut in the vicinity of the temple and offer it to the Goddess.

Significance of the festival:

Goddess Attukalamma is said to be the incarnation of Kannaki, who is the heroine of Silappathikaram, which was written by a Tamil poet Illango in the 2nd century A.D. The story says that her husb and Kovalan was unjustly put to death for stealing the anklet of the queen. Kannaki proves his innocence and in anger sets the Madurai city on fire. Kannaki took rest in Attukal on her northward journey from Madurai to Kodungallur. She met the head of Mulluveettil family and asked him for help to cross the river Killi. During that time, he was performing his rituals to Killi River and decided to help her cross the river. She was welcomed by the entire family after crossing the river, but she vanished while the family was busy with preparations.  That night Karanavar (the head of the family) saw her in his dreams where she asked him to make an abode for her in the nearby place. A temple was erected and later on Goddess Attukal Devi resided in her abode.

Women, especially seek her blessing because her sufferings represent the suffering of women and the goddess provides strength to overcome any sufferings. Children pray to her because she appeared in the form of a child in the dream and the goddess also holds a special place for children in her heart. 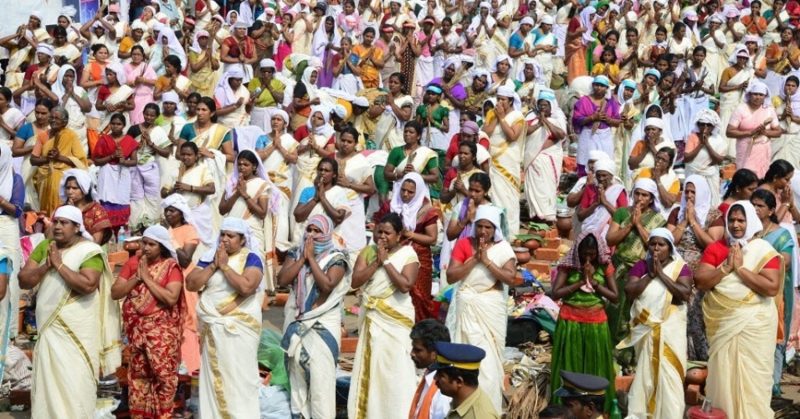 The festival is the largest single gathering of women >and the locals also support the devotees and help them stay in their own houses during the 10 day long program. The rituals are performed on the streets and the spots are booked in advance as people from different parts of Kerala and outside come to offer their prayers.  Women of all ages dress in off white sari with golden border and sit to perform the rituals. Women also bring colorful earthen pots to make a difference.

The preparation of Pongala:

Wood is used to light fire and the Pongala starts from around 10 a.m. The rituals recharge the devotees with happiness and make them mentally and spiritually strong so as to meet the challenges of the future. Pongala is prepared with rice, jaggery and coconut either in a thick liquid format or ladoos. Devotional songs are played during the celebration and even local authorities take every step to keep the area clean.

The devotees offer the Pongala to the goddess and the chief priest arrives with the Devi’s sword and sprinkle holy water on the ladies. The blessed Pongala is then taken back and shared with all the family members, neighbors and the visitors who come to participate in the festival. The idol of the Goddess is carried to Manacaud Sastha Temple in a procession that is accompanied by Thalapoli, caparisoned elephants, Vahanam, Annam and etc. Famous artistes play music and add to the festivities. The procession then reaches back the next morning, thereby bringing an end to the festival.

This year the festival will begin from 3rd of March 2017 and conclude on 12th March.