Ganesh chaturthi is one of the most popular and major festivals that is celebrated with great devotion and enthusiasm in India. One of the most sacred Hindu festivals, it is the celebration of the birth of Lord Ganesha who is the supreme God of prosperity and wisdom. The Hindu God is popularly worshipped by people for his immense ability to remove obstacles from life and bring good fortune. 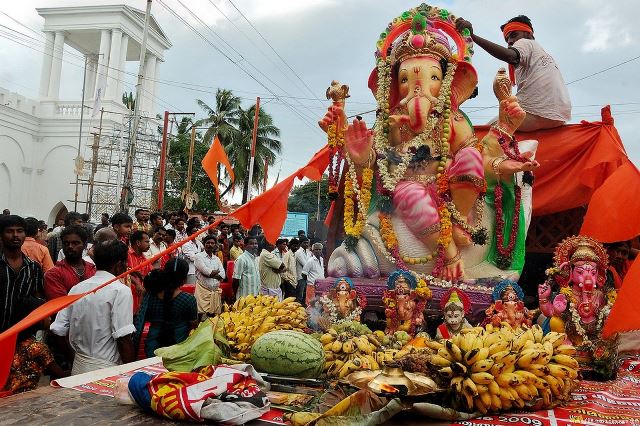 The celebration continues for five to ten days depending on the family traditions and is celebrated mainly in Maharashtra, Andhra Pradesh, Tamil Nadu and Orissa. It is observed in the month of Bhadra (mid August to mid September), depending on the cycle of the moon. The festival starts on the Shukla Chaturthi (fourth day of the waxing moon) and ends on the Anant Chaturdasi day.

History of the festival

Although it is not known when the festival was first being celebrated, but it is believed that during the reign of Chhatrapati Shivaji, the festival was celebrated to promote nationalism and bring a feeling of unity. According to Hindu mythology, Lord Ganesha is the son of Shiva and Parvati. The lovable Ganapati has the head of an elephant with an elegant tiara, the four hands are joined to the body with each hand holding a symbolic object – a trishul in one, an ankush in another, a lotus in the third and a rosary in the fourth. This deity of auspiciousness is famous for his profound sense of humor.

There is an interesting story behind the birth of Ganesha. Goddess Parvati created Ganapati with her sandalwood paste before bathing and gave him life. In the absence of Lord Shiva, she asked him to guard the door while she bathed. When Lord Shiva returned, he got into a fight with Ganesha as he did not allow him to enter according to his mother’s orders. Outraged by his behavior, Shiva cut off Ganesha’s head. When Parvati saw this, she took the form of Goddesses kali and threatened to destroy everything. Shiva immediately sent his attendants to find the first living creature whose mother has her back towards the child. Finding an elephant, the attendants cut its head and brought it to Lord Shiva. He placed the head on Ganesha’s body and brought him back to life. All the Lords blessed him and named him Ganesha, which means the chief of the ganas (attendants of Shiva). This brave guardian is worshipped during every Hindu festival and before people starts any new venture or undertakes a journey. You will find him guarding the entrances of homes and temples and also in marriage cards and other auspicious occasions.

Why is Ganesh Chaturti celebrated?

In different parts of India like Andhra Pradesh and Maharashtra, this festival is celebrated for 10 days and is a grand public occasion. It is also celebrated at homes where Ganesh Chaturthi recipes are offered and devotional songs are sung. The clay idols of Ganapati are placed in outdoor tents for many people to view and pay homage or they are placed indoors for family celebrations.  The priests chant the mantras and the idol is placed under Bodhi tree as it is considered to be a great source of remedies and treats different ailments. It also produces Oxygen at night time. Lord Ganesha’s blessings are invoked as it helps to remove all obstacles and helps to attain success, especially when people are starting a new business or enterprise. He is the giver of fortune who can help to avoid natural calamities. He is also known as the patron God of Travelling.

How to celebrate Ganesh Chaturthi?

This is an important festival and is celebrated in different places of India. The image of the idol is believed to absorb all the negativity in a household and after the puja is completed, the idol is then immersed in the water, which is symbolic of dissolving all the negative energies in one’s life in the water.

Here are some steps to perform the puja at home

From this day the Lord is worshipped with great respect till the last day that is Ananta Chaturdashi when the idol is taken in a grand procession and immersed in a river or a sea.

This year, Ganesh Chaturthi will be observed on 17th September, so start making preparations and plan for a grand celebration.