Navaratri: A Festival of Nine Nights of Fast and Prayer

The name Navaratri itself brings to the mind, the sounds of “Dhak” and the traditional beats of dandiya sticks. Dressed up in colorful traditional attires, preparation for the nine days fast, one gets the perfect feeling of the festive nine days dedicated to the nine forms of Goddess Durga. This festival is celebrated by Hindus all over the country with great devotion for 10 days and it is a festival of lights, festivity and joy. 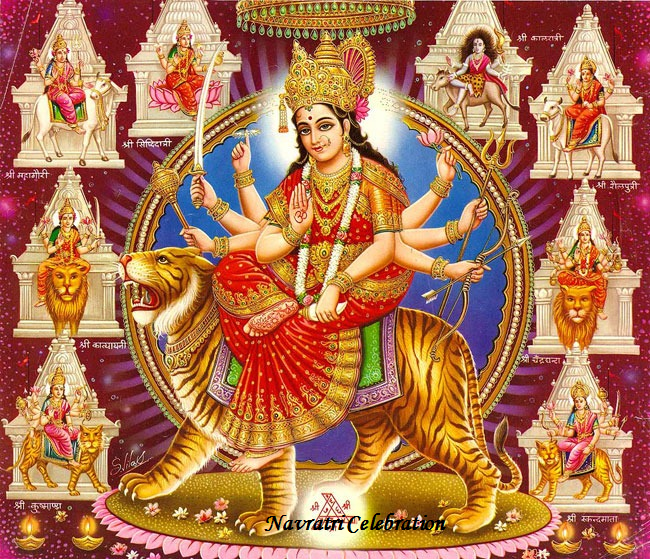 What is the significance of Navaratri?

Navaratri is not only a festival for spiritual aspirants; it also has a message for people leading a worldly life. We invoke the power and energy in the form of universal mother “Durga” which also means the remover of miseries of life.  Symbolizing the victory of positivity over negativity, these nine days are celebrated in three different forms. The first three days are tamasic, the next three days are rajasic and the last three days are sattvic. All these three qualities are a reminder that we should awaken to the divinity and nurture all the good qualities by removing negativity and by invoking and awakening the Divine in us.

At home, we invoke Goddess Durga to surmount obstacles, pray to Lakshmi for peace and prosperity and worship Saraswati to gain knowledge. All these three things are essential for a complete worldly life and while we pray, we are but invoking the Shakti within ourselves.

Why invoke the mother goddess?

It is believed that God’s glory, greatness, supremacy and cosmic energy can best be depicted in motherhood. Irrespective of all the qualities of a child, a mother always loves the child and it is same with the divine mother. Similarly, all of us look upon the mother during any troubles or problems in life. Hinduism gives great importance to motherhood and it is through Goddess Durga that it is best represented and it is believed that mother is the creative aspect of the absolute. During the Navaratri celebration, people observe a fast and pray for good health and prosperity. This is traditionally an auspicious time, a period of purification, a time to begin new ventures.

During Navaratri, people from cities and villages gather to perform Navaratri puja vidhi in temples and shrines where mantras are chanted, bhajans and folk songs are sang accompanying the puja rituals and vidhis for nine consecutive days. The festival is witnessed in varied forms in India. In Bengal it is celebrated with great enthusiasm. Temples are decorated; people buy new clothes and perform the puja on saptami, ashtami, navami and dashami. In Gujrat the focus is on Garba, a devotional navaratri dance form that is derived from the folklore of Lord Krishna and the gopis using dandiya for singing and dancing. In Jammu, the Vasihno Devi shrine is visited by numerous devotees. Ramlila, where people enact scenes from Ramayan is also performed in big grounds and Dusshera is celebrated all over the country.

How to do Navaratri puja at home?

During these nine day festival, it is best to conduct the puja at the specific time each day and sunrise is the best time. On the first day, Sthapana of an idol of Goddess Durga is done and the kalash with coconut and mango leaves are also placed before the idol. Arti is done and the pandit comes and performs the rituals. Red cloth, flower garlands, ganga jal, naivedya, fruits, betel leaves, oil lamps , incense sticks are some of the ingredients that are used in this puja. On the ninth day, kanya puja is done where 9 girls are fed and worshipped. They are considered as the forms of Goddess Durga.