Why the Ganges is Considered Sacred?

The Ganges or the River Ganga is the most famous river of India. This beautiful and serene 2,506 km (1,567 miles) river rises in the western Himalayas and drains an area which is approximately three times the size of Spain. Swaying across the northern India, Bangladesh, it empties into the Bay of Bengal. Crossing the holy Rishikesh it enters the plains at Hardwar which is a sacred place for the Hindus. 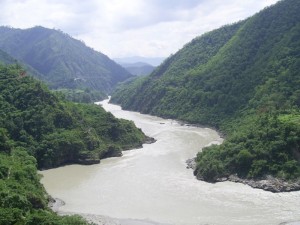 There is no denying the fact that the Ganges is considered to be the most divine river by the Hindus for the past so many centuries. As a matter of fact, the Ganges has more religious importance than any other river in the world. On the banks of this river, there are several places of Hindu pilgrimage among which Hardwar, Allahabad and Varanasi are the most significant ones.

When it comes to the religious importance of the Ganges, it is essential to note that it is considered sacred owing to two reasons – due to mythological context; and due to the physical properties of its water. Thanks to the presence of certain minerals in its water, the water of River Ganges does not get spoiled and can be preserved for a long time.

Legend has it that the Ganges once used to be in the heavens, and was brought on the earth by King Bhagirath to purify the ashes of the 60,000 sons of King Sagar. It is from that time onwards that people started worshipping this river.

It is due to the high popularity of this river that millions of pilgrims gather to its banks each year from different parts of the country. They believe that by taking a dip in its water, they will get rid of their sins and will get purified. Brahmins and outcastes, as well as the rich and the poor, all can come to this holy river for their spiritual purification.

The devoted followers of this river wish to die on its shores and have their ashes dispersed into its water. It is due to the holiness of this river that its drops are poured in the mouth of the dying people.