Why Don’t Oil And Water Mix? 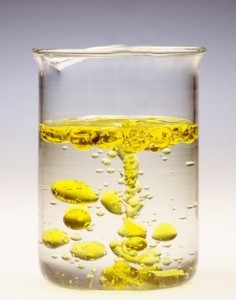 According to the scientific principle of ‘like dissolves like’, only such substances make solutions which have similar types of molecules. Thus, for a substance to be able to get dissolved in water, its molecules must form electrostatic bonds with the water molecules. Molecules of water are polar, which implies that one side of each water molecule contains a partial positive charge and the other side contains a partial negative charge. Thus, when the molecules of another substance like water and oil molecules common salt (sodium chloride) containing ionic or polar characters are put in water, then they are said to get dissolved in it. As a matter of fact, the polar molecules of water are drawn to the charged sodium and chloride ions, thereby creating a cluster around them. Because of this, the attraction between sodium and chloride ions gets reduced. They then get separated and are spread through the water in the form of a solution.