The Cock and the Hen 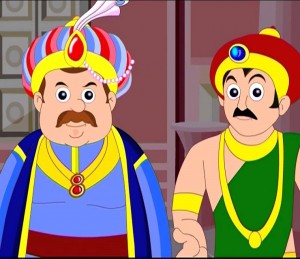 As Birbal always used to get the better off Akbar, Akbar once decided to make Birbal a fool. Thus, one morning, before Birbal reached the court, Akbar gave one egg to each of his ministers.

When Birbal arrived, the King said that he had a dream the previous night according to which he will be able to judge the honesty of his ministers if they will be able to bring back an egg from the pond that was there at the Royal Garden.

When it was Birbal’s turn, he enthusiastically jumped into the pond, but could not find any egg. He then understood that the King was trying to play a trick with him. Thus, he entered the court squawking like a cock.

The Emperor ordered him to stop making that irksome noise and asked him if he was able to find an egg.

On hearing this, Birbal smiled and replied that as only a hen can lay eggs, and he was a cock, so he could not produce an egg and bring it to the court.

Everybody started laughing on hearing the reply, and Akbar realized that it was not easy to fool Birbal.