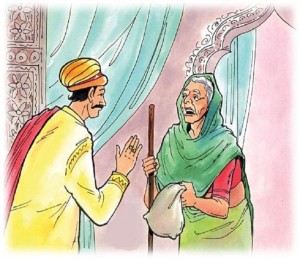 Once an old woman used to live in the city. Her husband had died, and she had no one to care of her. One day she decided to go on a pilgrimage to Kashi. She then took out her money-bag, which was full of money which was saved by her all her life. She kept half of the money to meet the expenses on the way, and she got the rest of the money exchanged in the market for gold mohurs. She was an intelligent woman and thus, marked the mohurs in a particular way so that she can identify them later.

After that, she put the gold mohurs into the money-bag, which was made of cloth. Then, she went to an important citizen, who was a man who attended to all the matters of religion.

She informed him, that she is going on a pilgrimage to Kashi and is afraid that she might get robbed on the way. So, she wanted to leave the bag of money with him for safekeeping. The citizen said that he already has a lot of troubles, and do not want any more of them.

She said that it will not be a trouble. If she will return in a period of three years or before, then she will take the bag back from him, and if she does not return within the stated time, he can then take the money and distribute it amongst the poor.

Being a respected and honoured man of the city, he eventually agreed to look after the bag. But he said that as he never touches money himself, so the woman should take the bag and bury it on her own in a corner of the room. Upon her return, she can dig the bag out herself from where she will bury it.

So, the old woman went to the corner and buried the money-bag. She also marked the place to recall it later. The man then said that she must not forget to get something for him from the temple.

After a year and a half, the man began to think the old woman would never return, so he decided to take out the bag. He did the same and emptied it by taking out all the gold mohurs and replaced them with copper pieces in their place. He then got the bag sewn up exactly in the manner it was before. After that, he buried the bag again in the same corner of the room.

After about two and a half years, the old woman returned. She went to the citizen and gave her what she had brought for him from the temple. The man thanked her for that. Then, she asked for her bag. He said that as he never touches money, she can get the bag from where the she had buried it.

The old woman then went to the corner, found the mark that she had made and looked for the bag. She became delighted to see the bag in the same condition in which she had left it.

But, once she returned her home, she got shocked to see that the bag contained copper pieces instead of gold. So, she went to the citizen’s house again.

She asked him that the bag contained gold mohurs earlier and now it has got only copper ones. So, she enquired him of the gold mohurs. The man said that he never touched the bag and was not aware of what was there in it. She got upset and said that the gold mohurs were her life’s savings and, if not him, then one of his servants might have done the evil deed.

The man said that no servant knew anything about the bag or even about the place where it was buried. The old woman started crying and asked him to keep half of the gold mohurs, but return at least half of them to her for her living.

The man said that he is a man of religion, and has no money at all. He said that he doesn’t have her money, and thus, she can go back to her home.

The old woman said that because of her tears the God will punish the wrong doer, but the man was not bothered at all. He called his servant to throw the woman out of his place.

When she reached her home, the woman’s friends advised her to go to Birbal. Thus, after a few days, she went to see him. She narrated the entire story to Birbal, and he called the citizen.

The man also stated the entire story to Birbal, without mentioning the part where he had taken the bag and got all the gold mohurs and replaced them with the copper pieces. Birbal then said that if his story is true, then how did the gold turn to copper.

On listening to this, the man said that the bag was made of cloth, sewn up, and could not have been opened. So, it might be possible that the old woman is mistaken and there might be no gold in the bag at all. He said that the memory of old people can not be trusted as it is not good.

When Birbal heard about the way the bag was made, he became doubtful of the man. He told the old woman that she need to worry about all this, as he will take care of it. He also let the man go.

That night, Birbal purposely made a small cut with scissors in the sheet which was there on his bed. The next morning, Birbal’s servant saw the cut, while making the bed. As it was a new sheet, the servant got scared that his master will got angry when he will find out about the cut. So, he asked for a good tailor in the vicinity from one of the old servants.

Thus, he got to know about Rafiq, who was a tailor who was very good at mending clothes. After hearing about him, the servant took the sheet to Rafiq and got it mended without any delay. Later, at night, Birbal inspected the sheet but could not see the cut he had made. He called the servant, and asked about it. The servant was hesitant to reveal the truth as he was scared of the consequences.

But, Birbal said that he need not be afraid as Birbal himself made the cut and want to know who mended it so well that it can not be seen.

The servant then told him about Rafiq. Birbal asked his servant to send the tailor to him as he wants to thank him.

Next day, Rafiq was brought to Birbal and after listening about how he mended the sheet, Birbal handed him the old woman’s bag and asked him if he remembered it.

After thinking about the bag for a while, he said that somewhere around two years ago, the servant of a man came to him with the bag which had a hole in it. He then said that he was asked to mend the hole which was there in the bag.

Listening to all this, Birbal immediately asked his men to call the citizen. When the citizen came, Birbal told him everything and the citizen could not say anything, thinking that he was caught.

Birbal said that even though the man could not touch money, he could touch gold as it was pure and clean. He then called the guard to take the man away. Realising that he might be put behind the bars, the man told all the truth to Birbal and accepted his evil motives.

He also gave the gold mohurs back to Birbal. Birbal called the old woman and gave her all her money back. Even though the citizen was not sent to the prison, he lost all the respect of the people.