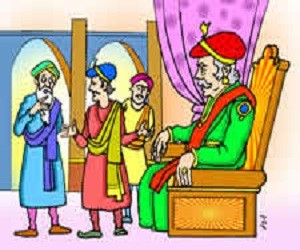 One day, a complaint was made at King Akbar’s court. There were two neighbours who used to share their garden. There was a well in the garden, which was owned by a man named Iqbal Khan. His neighbour, who was a farmer, wished to buy the well for irrigation purposes and they signed an agreement which made the farmer the new owner of the well.

However, even after selling the well to the farmer, Iqbal used to fetch water from it. The farmer got angry due to this behaviour and approached the King’s court for justice.

When Akbar got to know about it, he asked Iqbal about the reason why he fetched water from the well, even when he had sold it to the farmer. Iqbal replied, in his defense, that the agreement was only about selling the well, not the water inside it.

Akbar then asked Birbal to solve the dispute. Birbal came with a solution and asked Iqbal that if he has sold the well to the farmer, the water of which belongs to him, then how is it possible for him to keep his water inside someone else’s well without paying any rent?

Iqbal thus got contradicted for his trick, in a tricky way only. Eventually, the farmer got justice and Birbal was rewarded for his quick wit and intelligence.