It is a very well known fact that along with being the Emperor Akbar’s favorite minister, Birbal was also a much-loved minister of the commoners, all due to his exceptional wit and wisdom. Many people benefitted from his advice and those who lived in far-off places also used to come to him for his suggestions on personal matters.

On the other hand, there was a group of ministers who disliked Birbal and were envious of his growing fame across the country. They were good to him from the outside, but inside they wanted to devise a plan to kill him.

These ministers, one day, decided to give wings to their thoughts and reached out to the King’s barber. They asked him to assist them in getting rid of Birbal forever. In return, he was promised to receive a huge sum of money. Upon hearing this, the cunning barber agreed to be a part of the plan at once.

So, the next time the King called for the barber, he started talking about the King’s father who was also served by the same barber. He said that his father was a very noble man and had beautiful and silky hair. Then, he asked the King if he has been doing anything for the welfare of his ancestors. On listening to this statement of the barber, the King got extremely angry and told the barber that as his ancestors are dead, he can not do anything for their welfare.

This was what the barber wanted to hear. He immediately stated that he knows a magician who could help in this case, as he can send a person to the heaven and can help them fetch some news about the well being of the King’s father. However, the person should be an intelligent one who could understand the instructions of the magician in a successful manner and can also take decisions wisely and promptly. Before the King could say anything, the barber suggested that the right person for the job would be the wisest of all ministers, Birbal.

The King thought it to be a great idea and ordered the barber to make the arrangements for the task without any delay. He also asked the barber about the procedure that would be followed. The barber then said that they need to take Birbal in a procession to the burial grounds and there, they will light a pyre. Once this gets done, the magician would then chant ‘Mantras’ and Birbal would be ascended to heaven through the smoke. With the help of the chanting, Birbal will stay protected from the fire too.

The King got elated upon hearing this and informed Birbal about it. Birbal said that it is a great idea and wanted to know about the brain behind it. When he got to know that it was the barber’s idea, he said that he would go on a few conditions. First, that he should be given a huge amount of money so that his family can take care of its well-being when he will be away, and second, that he would need a month’s time for the same. The King readily said yes to both of the conditions. 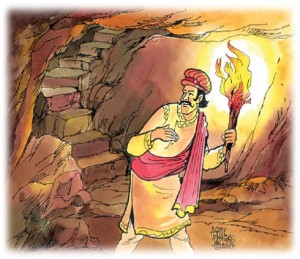 During this one month, Birbal arranged for a few reliable men who can build a tunnel from the funeral grounds to Birbal’s house. This way, on the day of the ascension, when the pyre was lit, Birbal escaped it through the covered door of the tunnel, and disappeared into his house. There he remained hidden for about a few months and let his hair and beard grow long and unkempt.

Meanwhile, Birbal’s enemies were delighted with the fact that he has gone forever. But, one day, after several months, Birbal reached to the King’s palace to convey the news about the King’s father. He told the King that his father was in a very good state and was enjoying several comforts, but one.

He said that as there were no barbers in the heaven, his father needs one. This is the reason why Birbal was also forced to grow his own beard and hair. Listening to this, the King took no time and asked for the barber to be sent to his father’s aid.

The barber could not say anything to defend himself, as Birbal tricked him in his own trap. The pyre was lit, and the barber died then and there. After that, nobody even thought of conspiring against Birbal ever again.