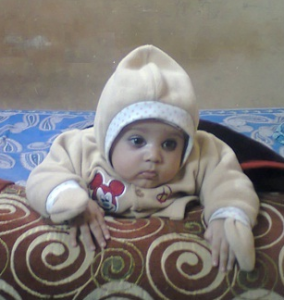 In this world a women plays many roles in her life like a daughter, sister, wife, daughter in law, mother, grandmother etc. but she is incomplete without being a mother.

My name is Manju Sharma and i am living in vasundhra Ghaziabad with my husband Ajay and my kids. I have two children, one daughter Gunnu and a son. My daughter has given him a nick name Kanha (this is another name of Lord Krishna). He is only seven months old and I am always worried about his safety because he is very active and naughty. Now a days he has started crawling. He slips again and again and retries to crawl. When I see him like this, I feel very special and happy. When your little darling takes the first step or speaks the first words, those are the happiest movement for any mom.

So, I help him to crawl by placing his favourite toys and other things in front of him. He tries to hold the things and then he keeps them in his mouth trying to cut them. He wants to keep himself busy by keeping everything in his mouth and biting them.

He looks very cute and most of the people say that he looks like a foreigner because of his brown hair and fair complexion.

I try to keep him away from unhygienic things because he tried to catch everything. Sometimes I keep some toys in front of him and he tries to crawl and pick up the toys. If he gets success in getting the toys; he becomes very happy but if fails to do so; he starts crying and looks like an angry man. Then I give him toys to make him happy.