Thrissur Pooram: A Festival That Serves a Visual Feast

Kerala is a beautiful coastal state in the deep south of India and is famous for its coasts, beaches and glistening backwaters. The tea covered hills and the palm shaded green make it a perfect bliss for tourists and it is also the home to exotic birds, wild elephants etc. Kerala is popular for many annual festivals that are dedicated to village deities or agriculture. These festivals are occasional breaks from the monotonous daily routine and one such famous festival of Kerala is the Thrissur Pooram festival. This 200 year old festival is one of the best means to enjoy the flavor of Kerala. 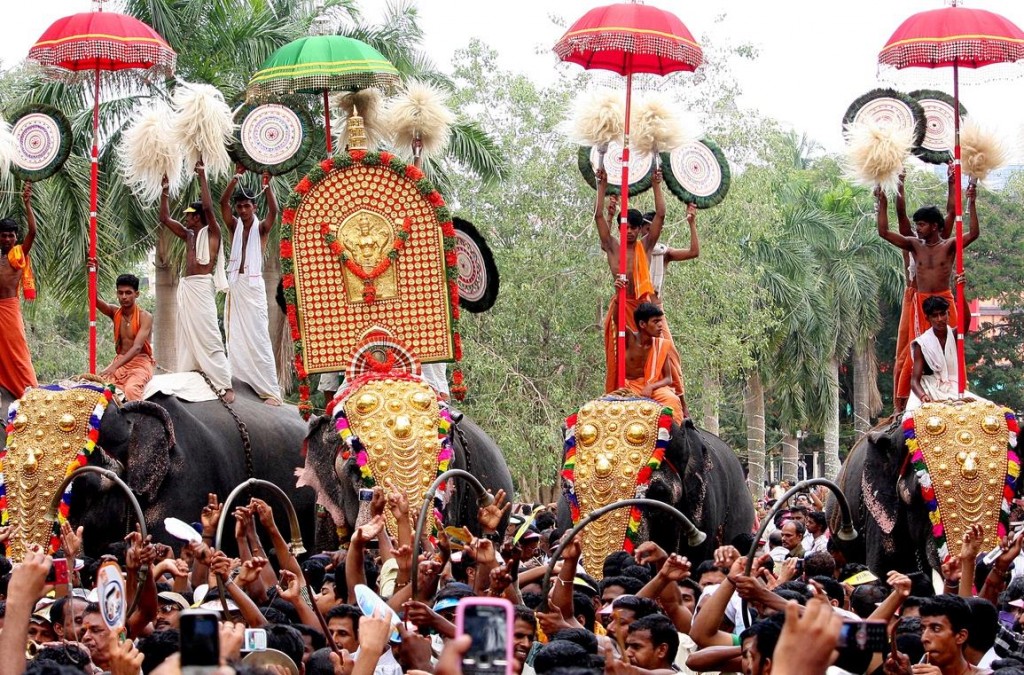 The History Associated With This Festival

Thrissur pooram is a festival that is unique in its magnitude, pageantry and participation. Celebrated in the month of April-May, it is a grand gathering of various Gods and Goddesses in and around Thrissur. These Gods and Goddesses visit the Vadakumnathan temple premises located on a hillock right in the center of the city on decorated elephants that are accompanied by long processions and grand ensembles of pancha vadyam and chenda melam.

Many stories are associated with this festival. It is said that once due to heavy rain, many people could not attend the Arattapuzha festival and as they arrived late, they were not allowed to enter the temple. As an act of reprisal, the chief of Vadakunnathan started the pooram in Thrissur. This festival of Kerala was even more extravagant and rewarding than the Arattapuzha festival.  But due to certain reasons, the glamour of the pooram was lost and the celebration at Thrissur was disassociated. But later on when Sakthan Thampuran became the Maharaja of Kochi, he decided to unify the 10 temples located around Vadakumnathan temple and started to celebrate Thrissur Pooram as a grand festival.

The Thrissur Pooram festival is a seven day-long celebration starting with the flag hoisting ceremony. The city comes into life with the opening of the exhibition. It offers an excellent platform to promote and advertise and sell various products. The day starts with a sample firework and is a 36 hour continuous pooram that attracts huge crowds from different places including international tourists. The two major temples that make the festival remarkable are Thiruvampadi and Paramekkavu.

On the fourth day, many colorful displays of fireworks are made and people w 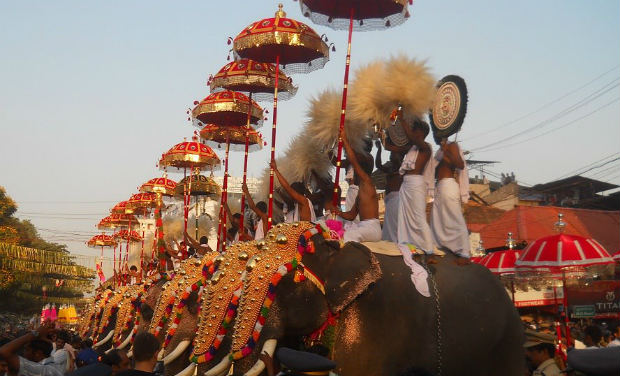 ait for the sixth day which is the main day of celebration. It happens with the pooram star rising in the sky and the priests of both the temples pray to Lord Shiva, the presiding deity of the Vadakunnathan temple. Large processions stand opposite each other and the idol is placed in the center. The two processions are noted for their collection of elephants that are decorated with golden headdress, ornaments, decorative bells, umbrellas and etc. Both the temples present spectacular fireworks and various innovative and charming activities that make the spectators wonder. The competition involves rhythmic changing of brightly colored parasols, features more than 250 odd artists with tens of thousands of music lovers who swing to the beat of the rhythm generated by the chenda, kombu, kuzhal, which are traditional musical instruments of Kerala.

At the end of the festival, both the groups enter the temple through the western gate and exit from the southern gate. All the drums continue to beat throughout the day and the final to this extravaganza is marked by a wonderful display of fireworks that leave the spectators in awe.

The festival dates of this celebration are decided according to the Malayalam calendar and as per the local customs and traditions. People from all over the country come to Kerala to enjoy this traditional celebration and to get a taste of the culture of the land.