Once upon a time, in a place known as Seri, lived two salesmen who used to sell pots. They mutually agreed that once a salesman has gone through a specific area, then the other one can sell his wares by wandering around that area too. 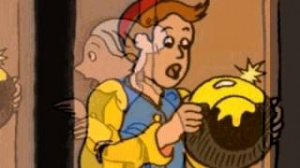 One day, when one of the salesmen was walking over a street, a poor little girl saw him and asked her grandmother to buy her a bracelet. But the grandmother said that they can’t afford it, as they are too poor. Hearing this, the little girl suggested that they can exchange it with a black sooty old plate that they have. The old woman decided to give the idea a try, and so, she invited the dealer to their place.

After observing that the family was extremely poor and would probably have no money, the dealer ignored their call as he did not want to waste his time. But, when the old woman pleaded a lot, he said that he does not have any bracelet that they can afford. The old woman then brought that old plate and asked if they could barter it for the bracelet. The dealer examined the plate and accidentally scratched its bottom to find that it was of gold. Even after discovering this, he did not inform the old woman and instead made a plan to deceive her by giving her almost nothing for the plate.

He said that the plate is not even worthy to be exchanged for a bracelet and he do not want it. He thought he would visit the place again after sometime and would get it by giving them something that would be much cheaper than the bracelet.

While he was gone, the second salesman visited the area and the old woman again asked the other salesman to visit her place. She offered the same black sooty old plate for one bracelet and the second dealer examined it. He also found out that the plate was a golden one and he said at once that all that he has, including all of his goods and money, are not worth as much as the golden plate.

Hearing this, the old woman and the little girl got shocked, but they liked the honesty of the merchant. Thus, the old woman said that they will happily take whatever he would like to trade for the golden plate. The merchant then gave them all of his pots, pans, jewels, and money, but he asked the old woman to let him keep just eight coins and his balancing scale with its cover so that he can put the gold plate in. The old woman agreed willingly.

Once the trade was made, the second merchant went down to the river, where he spent the remaining eight coins to pay to the boatman to ferry him across to the place he lived.

In the meantime, the greedy salesman returned to the old woman’s house, fantasizing about the huge amount of money he would make. He told the old woman and the little girl that he has changed his mind and want to offer a few cents, but he could not trade one of his bracelets for the worthless black sooty old plate. The old woman replied that he lied to them and the golden plate was worth much more than he had with him. She calmly told him about the honest salesman and the deal that they had just done.

Rather than being ashamed of his deeds, the greedy salesman became upset and asked about the directions of the honest merchant. When the old woman told him the direction, he dropped all his things at her doorstep at once and ran towards the river, thinking that the honest salesman had robbed him and made him a fool.

When he reached the riverbank, he saw the honest salesman crossing the river through the boat. He shouted the boatman to come back, but the good merchant instructed him to keep rowing. This way he crossed the river gradually.

Seeing this, the greedy salesman got extremely angry and started beating his chest, and jumped up and down in anger. He was filled with so much hatred for the honest man, that he coughed out blood, got a severe heart attack and died then and there.

Moral of the Story : Those who are honest have nothing to lose.