The Lion, the Camel, the Jackal and the Crow

Once there was a lion called Madotkata who ruled a jungle. The lion had appointed a leopard, a jackal and a crow for his service, along with the other animals.

One day, while wandering around the jungle, the lion saw a camel approaching from a distance. The camel had been separated from its caravan and was relying on the green grass of the jungle to satisfy his hunger. 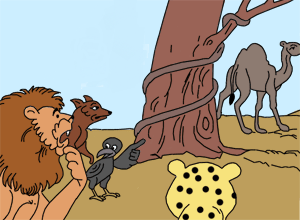 The camel was an animal which the lion had never seen before. He had a discussion with the other animals and decided to ask the extraordinary animal about the place where he used to live.

The crow, who was well aware of the distant places and the animals that used to live in those places, informed the lion that this animal is called a camel and lives in villages. He said that the flesh of this animal tastes extremely good, and asked the lion if they can kill it and enjoy its scrumptious flesh.

The lion’s opinion, however, differed from the opinion of the crow and he said that as the camel does not actually belong to the jungle, so he is their guest. He asserted with conviction that the camel will not be killed and asked the crow to tell the camel that no one will harm him. He also asked the crow to bring the camel to him.

After discussion with the camel, the animals brought him to the lion. The camel stood before the lion and bowed in front of him. He told his story as to how he got separated from his caravan and reached the jungle.

After hearing the story of the camel, the lion asked him to not to return to the village as there he will again have to carry a lot of burden. He told the camel that he can stay in the jungle and enjoy the abundant green grass of the jungle without having to face any kind of fear.

The camel thought that the offer is great and he, at once, accepted it. They started to live together in the jungle peacefully.

Time went by, and one day, the lion got badly injured in a brawl with a mad elephant. Due to the harsh wounds, he could not even take a few steps, and thus, he could not carry on his hunting activities.

Owing to the dearth of food, the lion got weaker, day by day. The entire clan of animals which used to serve the lion was also starving as it was reliant on the lion for their diet. Then, there came a time when it became almost impossible for the lion to live without food. So, he called the animals that served him and asked them to hunt for an animal which they all can eat.

All the animals rambled in the jungle, but to no avail. They could not find anybody who can help in satisfying the hunger of the lion and of the clan as well. However, the shrewd jackal had a plan in mind. He told the crow, that wandering around the jungle in search of food makes no sense when they have the food with them already. He stated that the camel can be their food for a long period of time.

But the crow anticipated a problem in that scenario. He stressed the fact that the lion had refused to eat the camel before and he will not be convinced even now. After a thorough discussion, the jackal and crow decided that the jackal will influence the lion in such a manner that he will approve the decision of eating the camel.

The jackal then had a meeting with the lion and said that they cannot find any animal in the jungle and this will worsen their situation and might prove to be fatal for them. He then very cleverly put his suggestion of eating the camel in front of the lion, and expressed that this act will prove to be extremely beneficial for them all.

On hearing this, the lion got furious and told the jackal that he had given his words to the camel that he will be safe in the jungle and it is a pity that the jackal thinks otherwise. The lion said that eating the camel, even after promising him his safety will be a sin.

The shrewd jackal then said that if the camel comes and sacrifices his life on his own, then it will not be a sin. The lion couldn’t disagree more and asked the jackal to take the action that he thinks is for the betterment of all.

After gaining the lion’s approval, the jackal went to all the animals and said that their master has become extremely sick. He said that if something will happen to the lion, then they won’t stay protected and safe in the jungle anymore, and as there are no animals in the jungle that can satisfy the hunger of the lion, so they should repay their debts to their master by offering themselves to him. This way, the rest of the animals can satisfy their hunger too.

As decided, all of them visited the lion and bowed in front of him.

The crow asked the lion to feed on him and satisfy his hunger, but the jackal intervened and stated that as the crow is too small, eating him would not serve any purpose. However, the devotion he has towards his master has become evident from his willingness to sacrifice his life, and thus, he has been freed of all the debts that he had towards the lion. 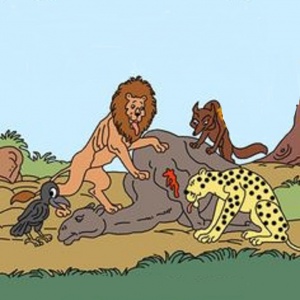 The jackal then asked the lion to accept his offer instead and eat him to save the clan from hunger. The lion refused to accept this offer and, one by one, the other animals put their offer in front of the lion too. But, the lion kept on rejecting the offers.

After asserting this, the camel came forward and bowed in front of the lion.The camel was observing all this and thought to put his offer in a similar fashion in front of the lion. The camel said that he offers himself as a food for the lion, because the lion cannot eat other animals as they are all carnivores.

The moment he made his offer, all the other animals started cheering. The lion was already influenced by the jackal, and thus, he instantly jumped on the camel. He was then killed by the lion and eaten by all the animals in unison.

Moral of The Story: When surrounded by wicked people, be extremely careful and don’t fall for their sweet words.