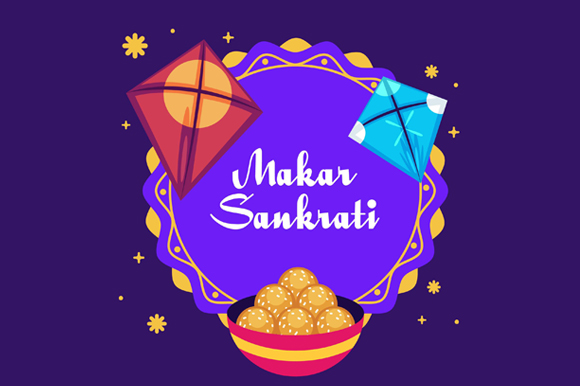 All Hindu religious festivals are mostly intended to be celebrated in a spiritual manner so that people can derive benefits from them. However, with the passage of time, various local customs have influenced the celebrationsand accordingly the customs have also created more impact on the peopleand they have started to celebrate the festivals in their own way. Makar Sankranti holds great significance to the Hindusand it is considered to be the new dawn of the Gods. Though the festival is considered to be a major harvest festival, it also holds importance of the Sun to Earthand to all the other living beings.

Makar Sankranti is a festival for adopting the Godly positive contemplation by discarding the demonic or negative reflections. It is on this day that the Sun enters the sphere of Capricorn known as Makar, which defines the movement of the Sun in respect of Makara. It is considered to be an auspicious day that begins with self purification: mental, physical, moraland emotional, abstaining from the worldly pleasuresand rising to a higher level. Thus, the entry of the sun into the Makar Rashi is known as Makar Sankrantiand is recognized as the dawn of the Godsand the beginning of the night of demons after the sunset.

Natural reasons behind the significance of Uttarayan:

According to religious beliefs, the position of the sun from Makar is called Uttarayanand it is the awakening of the Godly consciousness. During this time the period of days increase dailyand the period of nights shorten, which means that that days are longer than the nightsand there is more sunlightand heat for longer periods of time. It is from this natural point of view that Uttarayan holds much importance.

From the geographical point, Uttarayanand Daksshinayan occur in the Northernand Southern equatorial linesand it is due to the position of the sun that the cold waves of the winter diminish after the fall of Makar Sankranti. The taming down of the biting cold is because of the increase in the heat of the sunlightand it is with this that the working efficiencyand the consciousness of the people also get increased.

Uttarayan is meant for enlightenmentand Dakshinayana is for purification

The Sun in relation to the planet Earth shifts from the Southern run to the Northern run – from Dakshinayana to Uttarayan. What happens is that in terms of the celestial arrangement, on December 21, the sun is over the Tropic of Capricornand from that day the movement of the sun slowly shifts to the North. People who are spiritually aware have identified this transition as a great possibility for human consciousness to blossom. The first half of Uttarayan is the period when the maximum amount of grace is available.

One famous story associated with this is of Bhishma waiting on his deathbed made of arrows for many weeks. Though he was severely wounded, he held his life till Uttarayan, so that he could make use of this transition in nature. It is said that Gautama also attained his divine status on the third full mood day after Uttarayan. Thus, in terms of sadhana, Uttarayan is for enlightenment. This is also a period of graceand enlightenmentand the attainment of the ultimate.

Usually night is considered to be the symbol of negativity, sin, wrong doings whereas day is considered as the symbol of virtue, truthand religion. So, when it is the time to start some good work, this day is usually preferredand it is believed that the fruit of the work is also good. From this day, the doors of Heaven remain openand so people choose this day to celebrate the auspicious occasion. It is on this day that married women pray to the Sun God for the long life of their husbandsand offer gifts to the elders. In return they seek the blessing that as the days becomes longer; similarly the life of their husbands should also keep increasing.

Makar Sankranti is a festival that is celebrated on the basis of the date. Most of us know that there is no change in the dateand the festival is celebrated on 14th January every year. But this is not the fact. The date advances by one day every 72 years round based on the rotational speed of the earth around the sun.

Different names of the festival:

Makar Sankranti is represented with different names in different parts of India:

The importance of taking a bath on Sankranti

Since the sun enters the Makar rashi from Dhanu rashi (Dakshinayan), bathing is considered important to get rid of the sankraman to purify the bodyand the soul. Uttarayan is the considered to be the days for Godsand it is believed that Gods came at Sangamand other holy rivers to take a bath. So, as per Hindu religion, there is the presence of the Gods in the waterand taking a bath in the holy rivers during Makar Sankranti, Kartik Purnima etc. is considered to be auspicious. Bathing helps to purify our bodyand helps to utilize the positive energy.