The relationship of a brother and a sister is a very pious relationship and the bond of their love is celebrated in India every year during the festival of Rakshabandhan and Bhai Dooj. 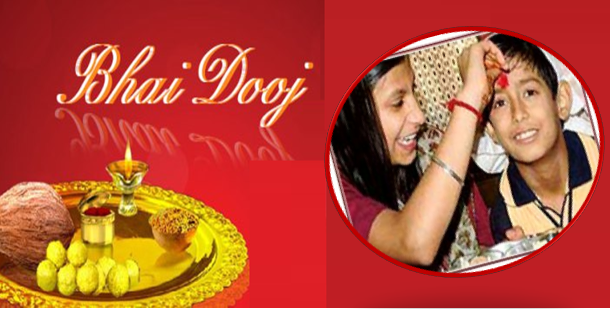 Bhai Dooj is celebrated two days after the festival of lights, Diwali in the bright fortnight or Shukla Paksha in month of Kartika as per Hindu calendar. The festival of Diwali is incomplete without bhai dooj. ‘Bhai’ literally means brother and ‘Dooj’ means the second day after new moon. The festival is mostly celebrated in the northern regions of India like West Bengal, Uttar Pradesh, Bihar and Maharashtra.

Due to the cultural diversity, the rituals, customs and traditions may vary a little in the different parts of the country, but the essence of the festivities remains the same.

The festival is known by various names in the different regions of India like “Bhaiya Dooj, Bhai Dooj or Bhatri Ditiya” in the Hindi-speaking belt, “Bhau Beej” in the Marathi-speaking communities, “Bhai phota” in Bengal and “Bhai Tika” in Nepal. It is also referred as Bhathru Dwithiya or Yamadwitheya in some of the regions.

On this auspicious day, every sister prays for the long life and wellbeing of her brother and every brother promises to always take care of his sister.

It is believed that every brother who gets a Tilak or Tika on this day from his sister will never go to hell.

It is believed that once Yamaraj, the God of death, went to meet his sister Yami after a long time. Yami got very happy after seeing his brother and welcomed him by putting an auspicious mark (tilak or tika) on his forehead for his welfare. She then offered several delicacies to her brother and both of them shared a meal. Yamaraj was so pleased with the reception and love bestowed by her sister that he proclaimed that every year, on this special day, if a sister puts a tilak on her brother’s forehead, then no one can harm her brother and he would never be sent to hell.

Since then the festival is celebrated and the tradition is followed till date. Sisters put a tilak on their brother’s forehead and perform puja for their safety and wellbeing. In return, every brother gives gift to his sister as a token of love.

According to another legend, on this day, after killing Narakasur, the king of demons or asuras, Lord Krishna, went to meet his sister Subhadra who welcomed him in the traditional way with an aarti and a tilak on the forehead.

Another legend behind the origin of the festival says that Bhagawaan Mahavir, founder of Jainism, attained nirvana. His brother Raja Nandivardhan was very sad because he missed his brother very much. His sister Sudarshana then comforted him.