Navratri is round the corner! People will be in the festive mood, and this feeling will be diffused in the surroundings for the complete nine days. It is usually observed in the month of September or October, and is popularly known as “Sharad Navratri”. This year it will start from 7th October and last till 15th October.

As per the Hindu belief, Navratri is the most auspicious time of the year. The preparation of this festival gets started in advance every year. All the temples are decorated wonderfully, which is worth watching. It is celebrated with great pomp and enthusiasm throughout the nation. 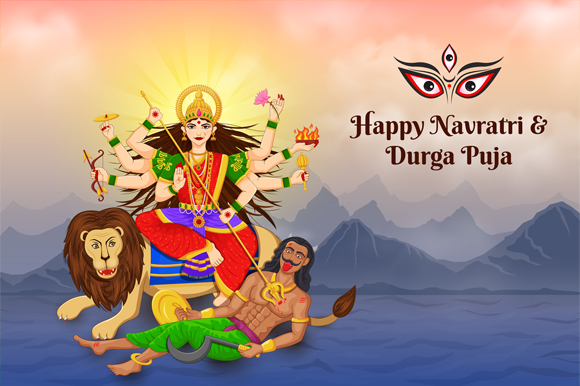 This occasion has an interesting history that you all should know about. It is believed that Lord Brahma, Vishnu, and Shiva united their powers to form Goddess Durga for the sake of defeating the demon king Mahishasura because he attacked Trilok.

He was granted a wish by Lord Brahma that he could only be defeated by a woman. By assuming the fact that no woman could harm him, he started creating havoc in three realms- Earth, Heaven, and Hell.

Goddess Durga assassinated him with her Trishul by battling for 15 long days during Mahalya. To stop his act, the three lords joined their hands.

During Navratri, nine different forms or incarnations of Goddess Durga have been worshipped with different rituals and customs in different regions.

On the first day, Goddess Shailputri is worshipped, second day is dedicated to Brahmacharini, the third day is for Chandraghanta, fourth day is for Kushmanda, fifth day for Skandamata, the sixth day for Katyayani, seventh day for Kaalratri, eighth day for Mahagauri, and ninth day for Siddhidatri.

By worshipping these goddesses during Navratri, you will be blessed with prosperity and wisdom in life as per the popular belief.