Preparing A Child For Schooling

Two important issues to be addressed for preparing a child to start schooling are: 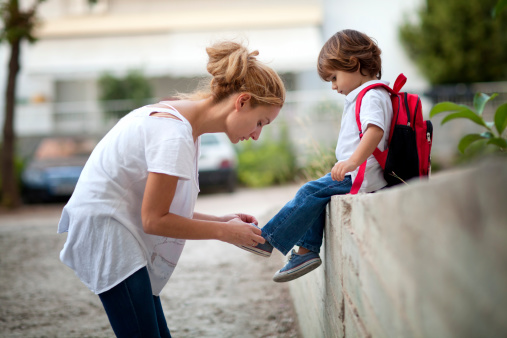 1. Separation Anxiety: The child has difficulty in separating from the parents for the time supposed to be spent alone in an unfamiliar place i.e. the school. This is a normal phenomenon occurring in many children. With time and firmness on the part of parents, this anxiety decreases as the child becomes familiarised to the school environment.

Children are bound to be anxious and fearful when they are first sent to school, a completely unknown place as compared to the warmth and safety of his home. On the first day, the child may not make a fuss right away, but after sometime may start missing his mother and then become upset and scared. So ideally, the initial few days in school should be short, say 2 hours or so, so that the child slowly gets acclimatised to bear a short absence of his parents.

This anxiety is generally not seen in kids who have elder brothers or sisters. They are familiar with the concept of schooling and do not have any such fear. Sometimes it so happens that the mother’s anxiety is greater than the child’s is. If the mother says good-bye three times over with a concerned look on her face, the child may think that something is amiss or wrong. He gets the idea that something horrible may happen if he stays in the school without his mother. 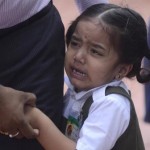 Many children make a great hassle going to school in the initial few days to weeks. They cry a lot, become increasingly clingy and do not want to leave their parents. They may start crying right from the time that they leave the house; a cry which increases in intensity as the school approaches comes into view. On the way to school, they may make excuses like “my stomach is paining etc.” All this is a natural reaction to an acute anxiety of going to an unknown place. In a bid to escape from this, the child’s start crying, clinging and making excuses. This is a critical juncture where parents have to be strict. The cry and the pleading of the child is sometimes so heartrending that the parents melt and don’t send their child to school that day, of course after eliciting a promise from the child that tomorrow he has to go to school like a nice child.

The child in his anxiousness to be spared of school that day will make such promises, but do you think he will keep it up? Next day, again some or the other excuse will pop up. So the most important point for the successful induction of a child into school is that there should not be any absenteeism. The child has to be firmly dealt with and made to understand that he has to go to school. Once the child finds that there is no alternative and that his pleadings, crying and excuses are all in vain, these things die out and the child after without much fuss. In some children this time period may be quite prolonged, as long as 3 months +. But the parents should continue sending him to school if they want that their child to have a successful induction to schooling.

They can discuss the matter with the teacher, who already knows and understands the difficulty of such parents because this is not the first time that she is meeting such a case. In fact, such cases are much commoner than you imagine. On the other hand, if you bend down before the cries and pleadings of the child, you are supporting the behaviour instead of letting it “die out.” The child knows that by crying and pleading he can escape school, and so will use it again and again. As goes the wise old proverb “nip the thing in the bud”, parents should try for it, though sometimes they may feel guilt and pity for their child.

2.School Readiness: The child should be mentally & emotionally prepared to go to school. He should have some awareness of what a school is like and what it is for. The child has to be mentally 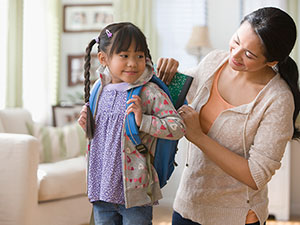 prepared before beginning of schooling, so that he/she can adapt to the new atmosphere. Parents should build the concept of schooling in the child’s mind by saying that “everyone goes to school and that they also went to school. Schooling is necessary because in school, you learn a lot of things and become big like Mummy and Daddy.” For the child, parents are his stars, whom he tries to follow. So, if he associates schooling with the idea of becoming like his parents, it is a positive reinforcement for him.

You should also prepare him mentally for a stay away from the parents for a limited time. You should encourage him that as soon as the school time is over, you will be there to bring him. This is important because many children, in the initial few days of schooling are nervous of the prospect of their being left alone without the parents. After all they are leaving the security of the home to go to an unfamiliar place. Some may consider it as some kind of punishment for them, because they did something, which the parents didn’t want them to do. Whatever you tell him about schooling at this preparatory phase should be true and actually should happen when the child goes to school.

Many parents, in order to make the child “more organized” for schooling, paint a rosy picture that school is a place where there is a lot of fun and games, where he will enjoy himself. But when the child actually goes to school, his “sky high“ hopes are brought down to earth. When he finds that the image is not all that rosy, that all is not play and fun, that no one is paying any extraordinary care towards him, he may get disillusioned. He may think that his parents have lied to him, just to drive him out of the house and make him go to school. Therefore, never present a wrong and exaggerated, rosy picture of the school to the child.

Some useful guidelines for parents are:

1. Parents must know that they are being good parents by compelling the child to go to school rather than being “bad” parents, as they are doing it for the good of the child.

2. The child should be reassured that his problems like stomach-ache etc. are due to “worry” and will become O.K. ongoing frequently to school.

3. In the initial few days, when the child is going to school, someone who is not likely to waver in the face of the child’s distress e.g. the father or some other adult should go along with the child to the school

4. In several cases, graded anxiety reduction may be useful e.g. if the school duration is of 6 hours, for first few days, the child can be sent to school for 2 hours. He can be progressively increased in increments over a period of time, once he becomes get used to it.

5. For children with intractable symptoms, a child psychologist should be consulted.

6. The most important thing is that there should not be any school absence. Longer the school absence, more difficult it is to acclimatise the child and make him go to school. The second most important thing is that if the behaviour of the child is not positively reinforced (by not sending him to school); the behaviour automatically tends to die out over a period of time.