An Overview of the Rich Indian Culture and Tradition

Have you ever wondered the reason behind the India’s culture still surviving with pride in the modern era? The reason is stands clear, which is the flexibility in Indian culture. It has never been rigid. Indian culture has beautifully imbibed the best qualities of various other cultures and has come out as an acceptable contemporary tradition.

The liveliness and generosity of the country with affection is what people visit India for. It attracts people with the unique way of greeting. Greeting with the word ‘Namaste,’ placing both palms together and raising below the face not only shows the respect, but makes the person greeted, feel the affection. It creates the magic which no ‘hi’ or ‘hello’ can do for sure.

Another famous way of welcoming is with flower garlands. These garlands are also exchanged between brides and grooms in marriages and also are offered to gods and goddesses during players.

Needless to say that India is a home of variety of official languages, apart from the language of love, warmth and affection. The country has 28 states and seven territories with at least on official language for each.

When taking about religion, there can be no other place better than India to view the diversity. The land of spirituality is the birthplace of four of the world’s major religions namely, Hinduism, Buddhism, Jainism and Sikhism. This has been an important part of its culture.

Almost 84 percent of the population being identified as Hindu, there are other variations of Hinduism and four predominant sects — Shaiva, Vaishnava, Shakteya and Smarta.

Among the remaining, 13 percent Indians are Muslim, Christians and Sikhs make up a small percentage and there are even fewer Buddhists and Jains. 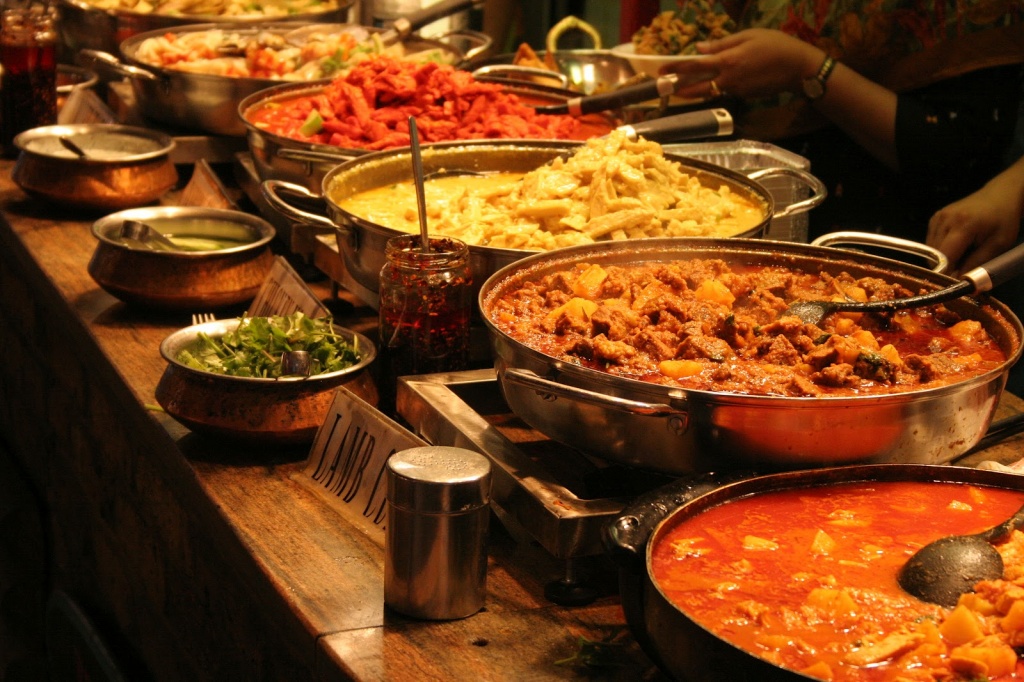 With different regions, religions, castes and language, every type has got their own unique cuisine that differs from the other. The country is known for its large assortment of dishes and is one of the most cuisine diverse countries in the world.

The country boasts Turkish, Arab and European influences and also for its liberal use of herbs and spices. The food here is rich and spicy with cardamom, coriander, dried hot peppers, etc. Chutneys made from assorted fruits and vegetables, tomatoes, cilantro and other herbs are generously used in cooking.

Among the non-vegetarians, lamb and chicken are the most common. Much of the Indian food is eaten with fingers or bread which is used as utensils. The food here not only differs in taste, but cooking style as well and reflects a blend of the various cultures and ages.

Indian architecture is one of the most enduring achievements of the Indian civilisation, which extends to a great deal more than the Taj Mahal or the temple complexes of Khajuraho and Vijayanagara. A number of different architectural styles can be seen in India which makes it stand unique, including a mass of expressions over space and time.

Architecture belonging to different periods of history marks the imprints of the respective periods.

India is well known for films, dance, music, collection of stone works, semi-precious jewellery, tribal and traditional paintings, etc. the arts here gives much emphasis to the Hindu religion and seems to be an illustration of their religious life.

The colourful and traditional clothing of India takes you to the cultural roots and reminds of the glorious past. The colourful silk saris worn by many of the women and dhoti worn by men is what makes the Indians stand apart.

The country celebrates Republic Day (Jan. 26), Independence Day (Aug. 15) and Mahatma Gandhi’s Birthday (Oct. 2). However, India doesn’t need a particular reason to celebrate or a floor to dance. From January to December, every month comes with a particular festival for every religion such as Makar Sakranti, Basanti Panchami, Holi, Ram Navami, Janamashtami, Diwali, Eid, Mahavir Jayanti, Buddha Purnima, Guru Purv and Christmas. These festivals have their own significance and are celebrated in a boisterous way.

The country is famous for the handicrafts melas and fairs it organises during particular intervals. The real dancing talents on the street can be seen during puja, Holi or Ganesh Chaturthi celebrations.

Indian culture has been derived by the absorbing of traditions and culture from both immigrants and the invaders. The best thing about the country is that even in the midst of such diversities, the people feels united and the words ‘unity in diversity,’ truly stands for the country.