She was only 15! Well, not really. She would have been 15 exactly after 5 days if fate would have allowed her. She was a joyful, intelligent, bubbly young girl who like any other girl of her age loved to party, sing and dance with her friends but a long eclipse engulfed everything. 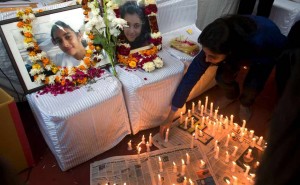 After release of the movie “Talvar” and the book called “Aarushi” covering the details of the trial of double murder mystery case by Avirook Sen, the nation is abuzz with a fresh debate on the verdict of the court that holds Aarushi’s parents responsible for her murder. Although both Meghna Gulzar and Avirook Sen have done a commendable job in presenting the facts in front of the people of India, but they couldn’t stop the nation to start the discussion again on the matter.

Everyone is debating whether Rajesh and Nupur Talwar are innocent or not. But has anyone dared to think who has actually killed Aarushi? In my opinion, it is we, the people of India, who have murdered her over the years bit by bit; every second, every minute and every hour.

“Was she in a relationship with Hemraj?”

“No, she had boyfriends with whom she used to chat on phone till late night”

“Really? Someone told me she had profiles on Orkut and Facebook also”

Now, can anyone tell me who is that “someone”? What right do we have to dissect each and every moment of her life? Have we ever met her? No. Then what right do we have to assassinate the character of a young girl? All the more when she is not around to defend herself. Let’s be honest enough to face the reality. From TV channels, to newspapers, to Bloggers to Sharma Aunty at the first floor of our society, no one has ever missed a chance to spill that mud on her character.

And as if that were not enough, questions were raised on the character of her parents as well. Now think about it. God forbid, if it were not Aarushi, and would have been your daughter, sister or any other acquaintance, would you have questioned their behavior the way you are doing with Aarushi’s? Of course not! So let’s stop acting like the CBI. Let’s be sensitive and considerate enough to let her die in peace. She has suffered a lot during the short span of her life and is getting a new scar everyday IF there is life after death.

All I know is that she was a cute young girl, who would have been 22 next year if GOD and WE would have permitted her. The young bud was not allowed to bloom into a flower; but if anything that we can do for her is, leave her alone in peace.

About The Author: Shilpi C:

I am an ardent reader, an avid traveler and a blogger by choice. Digital Marketer by profession, I am passionate about reading, travelling, food and technology. I love to share the new things I come across during the journey of my life and so….I started writing.