When To Start Schooling For Your Child?

School readiness involves a physical, social & emotional capacity to cope up with an alien environment. The demands are many. The child should have bladder & bowel control, should be able to overcome stranger anxiety & be away from his mother at least for some time. He should have a fair expression of language, both receptive & expressive. Although there are individual variations, usually these abilities are not present before the age of 3 years. It is not compulsory that you should send your child to school at the age of 3 years. You can wait for 1-2 years more i.e. till the child becomes 4-5 years old. The school should not be a strict school where they have the classical school type firm protocol & discipline. It should be a casual play type of school where the child learns while playing.

Some of the reasons why a child should be sent to school at 3 years are given below:

1. The child starts getting fed up at home at the age of 3 years+. This is the time when he desires for company, particularly of children of the same age group, with whom he can play & have fun. A play school is best for it.

2. The child starts learning the concept of schooling. The child learns to interact with others, becomes well-organized & learns social & mutual co-operation. He learns that everyone has his own rights & independence, including himself.

3. He learns a lot of things in play school like A-Z etc. while enjoying himself & takes justifiable pride in it. 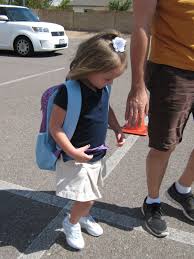 A child should be put in a class, the standard of which he is able to cope up with, i.e. the syllabus should not be beyond the child’s intellectual capacity. It doesn’t matter that the child goes to school one year late e.g. he is put into class 1 at the age of 7 years. One year doesn’t make any difference in the general life of a child. But failure to cope up with the lessons & always struggling to “stay afloat” certainly will have adverse psychological consequences for the child.