The Traditions Of Mundan Sanskar In India

Mundan or tonsure ceremony is an important tradition in the Hindu culture and is usually done in the first or third year of a baby’s life. In some cultures, the tradition of baby mundan is only for boys but in most places, girls have a mundan too. 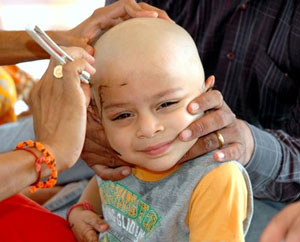 The Traditional Reasons For Performing A Mundan

In most cultures and communities, it is considered that a mundan purifies the baby. The first haircut of a child holds a lot of significance and therefore, the ceremony is celebrated on a large scale. Some of the common beliefs revolving around Mundans include:

What Happens During A Baby Mundan?

An auspicious date and time are decided by a priest based on the baby’s birth date. You can send a mundan sanskar card to your friends and family members once the event has been fixed. A havan is performed on this day and the mother holds the baby in her lap while facing west of the sacred fire. The priest reads a mundan sanskar mantra and shaves a part of the baby’s hair. After that, a barber shaves the rest of the hair of the baby. In some families, a father performs the first cut of the hair instead of the priest.

Once the head is shaved, it is washed with holy water (usually Gangajal) followed by application of a paste of turmeric and sandalwood. This process cools the head of the baby and protects him from any nicks or cuts. The hair is usually offered to a deity or a river, as per the belief of the family and the priest.

Tips For A Safe Mundan

Celebrate this special occasion with your loved ones and make memories for a lifetime. With proper care and attention, your baby’s mundan will surely turn into an unforgettable ceremony.