Dhanteras, also known as “Dhan Trayodashi” or “Dhanvantari Trayodashi”, is a Hindu festival and is celebrated two days before Diwali, the festival of lights.  (Dhan means wealth and Teras means 13th day as per Hindu calendar). Dhanteras festival falls in the month of Kartik of Hindu calendar (usually during Oct-Nov) on the thirteenth day of the dark fortnight. It is believed in Hindu mythology that on this day, Goddess Lakshmi came out of the ocean during the churning of the Sea (Samudra Manthan). 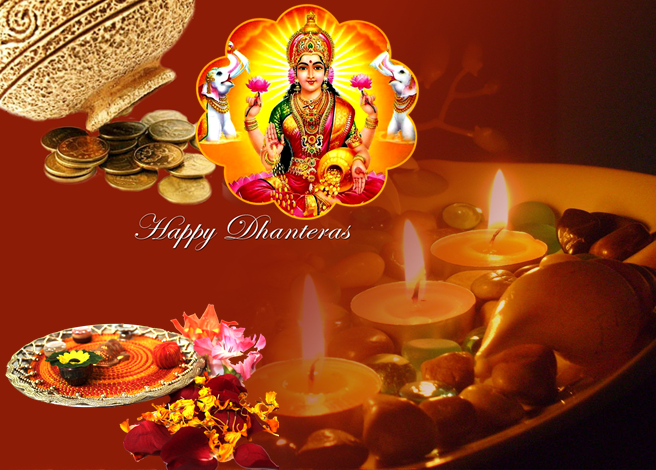 On this auspicious day, Lakshmi – the Goddess of wealth is worshiped to provide prosperity and well being. Lord Kuber, who is the treasurer of wealth and bestower of riches, is also worshipped on Dhanteras along with Goddess Lakshmi.

In popular practice it is an auspicious day for shopping of utensils and gold.

Many legends, beliefs and rituals are associated with the celebration of Dhanteras. Here are some popular legends:

Legend behind the Dhanteras:

The legend is associated with an interesting story about the 16 year old son of King Hima. The horoscope of King Hima’s son predicted his death on the fourth day of his marriage due to a snake bite.

When the newly wed wife of the prince came to know about this, on that particular day, she did not allow the prince to sleep all night. The bride heaped all her ornaments, valuables and gold coins at the entrance of her husband’s sleeping chamber, and lit lamps all over the place. She then started singing to keep her husband awake. When Yama arrived to take the prince with him, his eyes got blinded by that sparkle of the gold. Yama has come in the form of a snake, who, then sat on top of the heap and started listening to the melodious songs sung by the princess. The whole night passed in this way and Yama missed his deadline sparing the prince’s life.

Dhantheras is thus celebrated as a reminder that the karma (actions) are more powerful than destiny and with right actions, ill fate (destiny) can be corrected.

For this reason, this is considered an auspicious time to buy jewellery. Also as per beliefs to please and calm lord Yamraj to avert any mishaps and safeguard ones family; people light diyas throughout the night at the main entrance and also in the southern corner of their house. This ritual is popularly known as Yamdeepdaan.

Lord Dhanvantari is an avatar (incarnation) of Lord Vishnu who is the deity of health, and physician of Gods. In Hindu mythology, he is also considered as the lord of Ayurveda medicine.

Dhanteras is also an occasion to worship this avatar of Lord Vishnu.

As per legends, once Sage Durvasa cursed Lord Indra saying that he has been blinded with the pride of wealth and may Lakshmi, Goddess of wealth, power, bravery, enthusiasm & radiance leave him. To honour this curse, Goddess Lakshmi went away leaving Indra. Due to this reason Indra became powerless and his life became miserable. The demons who were waiting for an opportune time, attacked Indra and invaded heaven defeating him.

Many years passed and one day Indra went to Brahma along with other gods. Lord Brahma then went to Lord Vishnu to find out a way to end Indra’s misery. He advised them to do samudra Manthan (churn the sea of milk). He advised that on churning the ocean several valuable things will appear along with Amrit (nectar of longevity) and by drinking the same, devetas can become immortal and defeat the demons easily.

He also suggested that with this Samudra Manthan, Lakshmi, who has left the devatas, will appear again and bestow her grace on them.

The Gods (devatas) and Demons got ready for the churning of the ocean after several discussions. Lakshmi appeared during the churning and blessed Indra.

The churning of the ocean continued and finally Amrit or nectar appeared. Dhanavantri emerged from the sea carrying a jar containing the nectar.

The gods and the demons both wanted to become immortal by drinking the nectar, but finally Lord Vishnu managed to give it to the gods only who then defeated the demons.Because Goddess Lakshmi and Lord Dhanvantari emerged from the ocean on this day, people worship the the Tulsi and the Akashdeep, symbolically seeking the blessings of Nature which is the ultimate source of health and wealth. They also worship Goddess Laxmi for prosperity and well being.