According to Hindus, Goddess Durga represents the divine feminine force that governs all existence, cosmic creations and changes in the world. Puja of Ma Durga is a major festival of West Bengal for which everyone keeps waiting throughout the year. Celebrated on a huge scale with great joy and pomp, it is the puja of Goddess Durga after she gains victory over the demon Mahishasura. Usually celebrated during the period of September – October when the weather is pleasant giving the air a touch of festivity, the festival is celebrated by Bengalis from the day of Mahalaya till Dashami. 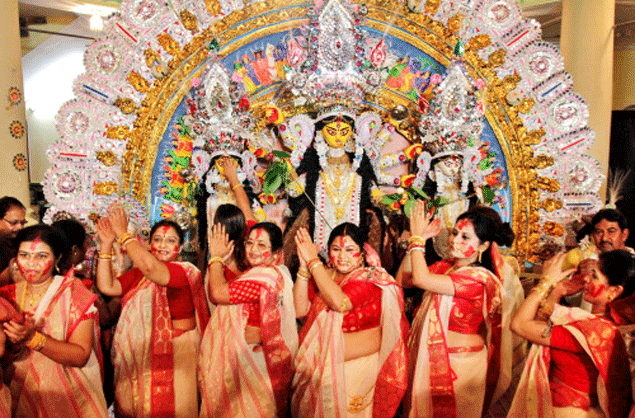 Durga Puja festival is celebrated not only in Bengal, but all through the Eastern India that includes Assam, Bihar, Odisha, Tripura and Jharkhand. It is also celebrated in UP, Maharashtra, Gujarat, Punjab etc. as Navaratri. The festival marks the return of Goddess Durga every year, remembering Lord Ram as he performed her puja for blessings in order to save Sita from the clutches of Ravana. A fierce battle was fought in Lanka, but Ravana could not be defeated and so Lord Rama decided to invoke the Goddess of Shakti, Ma Durga, to defeat Ravana. During the puja, Rama needed 108 blue lotuses, but could only manage to get 107. So he was on the verge of offering his eye that was lotus shaped and blue in color to the Goddess when she appeared and granted her blessings after being satisfied with his devotion. Ravana was defeated in the battle and from that time Durga Puja is celebrated.

Another story that is associated is the defeat of the demon king Mahishasura who was granted a boon that no male could defeat him. To find a solution to kill him, all the Gods gave their powers to create Ma Durga who defeated the demon king and was called the Mahishasuramardini, the slayer of Mahishasura. This battle symbolizes the victory of good over evil.

Bengali Durga puja is the most important festival and the celebration lasts for five days starting from the sixth day Maha Sasthi and ends with Bijoya dashami (the tenth Day). The city Kolkata and the towns dress up in a new look and the streets are decorated with different kinds of light shows. Restaurants and several temporary food stalls are opened that serves traditional Bengali dishes.  Highly decorated, life sized idols are placed in large open spaces or pandals –temporary temples made of bamboo and cloth to house the idols. The idols are worshipped for five days and then on the last day, it is carried in magnificent processions to the local rivers for immersion. This five day celebration is a time when people forget any differences and spread love and brotherhood. It is also the best time to start any new activities or business ventures. Earlier, the pujas were organized by neighborhood committees who went on seeking funds for the ceremonial activities, but today there are larger communities who offer sponsorship, adding a commercial aspect to this grand and spiritual celebration.

The festival starts from the occasion of Mahalaya where the Hindu Goddess Durga is invited to the earth. It is on that day that the eyes are drawn on the idols of the Goddess and this auspicious ritual is also called Chokh Daan. The idols are decorated and installed and a ceremony called the Pran Prathistan is done to invoke her holy presence on Saptami. A small banana plant dressed in a sari is placed beside the goddess. Kalash with mango leaves and coconut on it is also placed before the goddess. On Asthami, Ma durga is worshipped in the form of a virgin girl called the Kumari puja. The girls represent divine female energy, purity and divinity. Maha aarti or the great fire ceremony is performed and many people keep fast and offer pushpanjali to Goddess Durga. On Navami, prayers are offered and on the last day that is Dashami, married women offer red vermilion to the goddess and to other women and this denotes the status of marriage and fertility.

When is Durga Puja this year?

This year Durga Puja will be celebrated on 8th Oct Saptami, 9th Oct Mahashtami, 10 Oct Navami and 11th Oct Vijaya Dashami. Since Hindu Durga Puja is a festival of cultural performances, great food and festivity, start preparing yourself for the celebration with your family members much ahead of time.