India is a land of diverse cultures and the country is well known for its many religions and festivals. Each month of the calendar holds a religious celebration that people enjoy and every religion has their own set of festivals that is celebrated nationwide. Each festival has a significant story behind it. Krishna Janmashtami is an important festival that is celebrated by Hindus with great fervor. It commemorates the earthly appearance of Lord Krishna who was a God himself. It is celebrated by many people all over the world. Over nine hundred and thirty million people celebrate it and among them two million are from US alone. 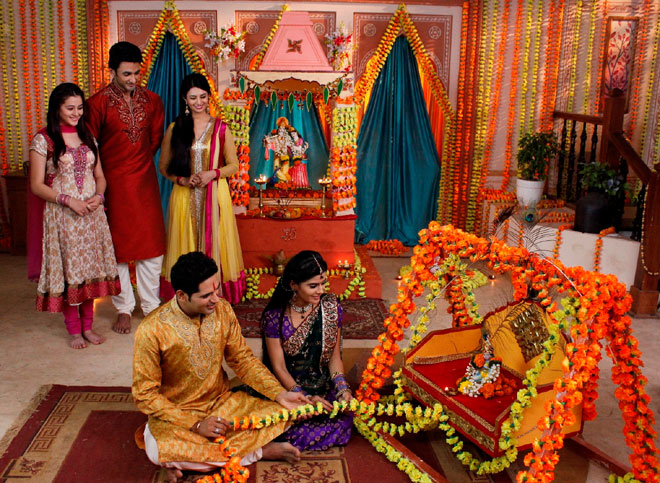 As stated in the Puranas, Krishna was born on the 8th lunar day i.e. asthami of the month of Shravan at midnight. The significance of the festival relates to the historical background of Lord Krishna and the reason why he was born. He is one of the eight incarnations of Lord Vishnu and the story goes like this. Mother Earth was appalled by the various sins committed on her surface so she went to Brahma, the God of Gods and appealed for help. Brahma on hearing her appeal, requested Lord Vishnu to take birth on earth and destroy the sins that are committed.

During that period, Mathura was in a miserable condition as Kansa, the brother of Devki had imprisoned his father Ugrasen and declared himself the king. To put an end to evil, Lord Vishnu decided to take birth as Devki’s eighth son. And there was a divine prophecy that this son would kill Kansa. On hearing this, both Devki and Vasudev were imprisoned and all their six infants were killed soon after they were born. The seventh child was saved due to divine intervention and when the eighth child was born at midnight, a chain of events happened. The gates of the cells flew open and all the guards were fast asleep. Vasudev reached Nand, one of his friend’s residences and exchanged his son with his daughter and returned back to the prison. When Kansa rushed to kill the baby, it slipped off his hands and flew to the sky and transformed into the goddess Yogamaya. Lord Krishna later on killed Kansa and saved Mathura.

Janmashtami conveys a message to all that when we are engulfed in the darkness of our own vices, then Lord Krishna takes birth and the darkness fades away and we are released from worldly pleasures. Since Lord Krishna was born at midnight, people gather to celebrate his birth by reading scriptures and singing devotional songs. The festival holds a special place and it is believed that whenever evil prevails on Earth, the Lord takes birth to eradicate all. This festival encourages unity and faith among all. 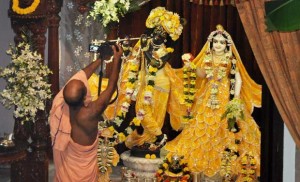 In the temples the celebrations begin before dawn and extends all day till midnight, when Krishna was born. People keep fast on that day and it is usually a waterless fast. They spend time in the glory of Shri Krishan by reading, singing and reciting his divine leela. The idol of Baal Gopal is placed in the cradle symbolizing his birth and devotees rock the cradle while reciting hymns. Events like kirtans, japa and more intimate prayers are performed by the devotees. The deity is decorated and flower garlands are hung in the temple.

People also prepare many delicious and authentic Janmashtami recipes like sabudana pakora, makhana kheer, panjeeri, peda, milk poli and etc. Sumptuous dishes are offered and Makhan is especially included in the celebration. The traditional Prasad Panchajiri that is made of five ingredients ginger, suva, coriander, ghee and sugar. Some other ingredients include desiccated coconut and poppy seeds.

Janmashtami celebrations also include the dahi handi ceremony where large earthenware pots filled with butter, curds, milk and honey etc. and are suspended from a height of about 30 to 40 feet. Young men and women make a pyramid to reach the pot and claim the contents after breaking it. Normally, currency notes are tied to the rope with which the pot is suspended. This replicates Lord Krishna’s love for butter and milk in his childhood.

Popular places in India that celebrate the festival

Janmashtami is celebrated equally in North and South India and people start the preparations weeks in advance. Dwarka is the place where Krishna was born and hordes of visitors flock to this city to witness the celebration. The city is decorated and special food items are prepared for offerings. The Rasleela of Vrindavan is famous and Kanha had spent his early childhood days there. He then moved to Dwarka and spent his major life there. He also spent some years in Mathura. In South India, the celebrations are prevalent in Tamil Nadu and Karnataka.  Other cities include Mumbai, Pune, Orissa and West Bengal where people celebrate this day with fasting and performing puja at midnight.

When is Janmashtami this year?

This year Janmashtami will be celebrated on 5th September. So if you are looking forward to celebrate the birthday of Lord Krishna with great devotion, then start making preparations for a grand celebration.