Makar Sankranti: A Festival of Spiritual Illumination and Happiness

Makar Sankranti is celebrated on 14th of January every year and has profound spiritual significance for Hindus. This festival is celebrated in a specific day that is according to the solar calendar instead of the lunar calendar that is followed in most of the festivals in the country. It is the only Indian festival that is celebrated in a fixed calendar day. Makar Sankranti is the festival of new beginnings, new commitments and resolutions and is also a festival of thanksgiving. People from different parts of the country perform Puja and Homa and pay homage to the Supreme God for supporting them throughout the year. 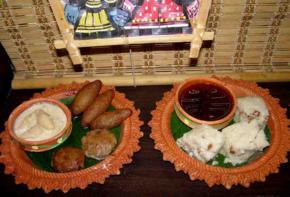 All over the country from North India to South, Makar Sankranti is celebrated auspiciously. On this day, thousands of people take a holy dip in the river Ganga and offer their prayers to the Sun God. The holy dip during this period has its own significance. It is believed that those who take a holy dip on the banks of river Ganga, Yamuna, Godavari, Krishna and Kaveri, acquire the highest merit. Any kind of donations proves to be more fruitful during this time.

The southern part of India also celebrates the festival as Pongal, which means overflo 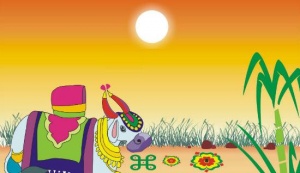 wing and signifies prosperity and abundance. It is a harvest festival celebrated by the Tamil people. They convey their appreciation and thankfulness to the Sun, the prime source of agriculture and good harvest.

In Orissa, it is celebrated as Dhamu Sankranti by both Arya and Anarya caste. Since it is a festival after the harvest, it is largely observed among all with ceremony and joy. In Puri, Jagannath temple, the festival is celebrated as Uttarayana Yatra and Uttarayan Vandapana of Lord Jagannath. People offer special items made of newly harvested rice, grated coconut, jaggery, molasses etc. to the presiding deity.

In West Bengal, it is known as Makar Sankranti as it is named after the Bengali month of Poush. To celebrate the harvest festival, Bengali families get busy making special kinds of sweets named Pithe, which is made from rice flour.  Another special thing is the Palm jaggery popularly known as the Khejurer Gur, which is available only during this season. 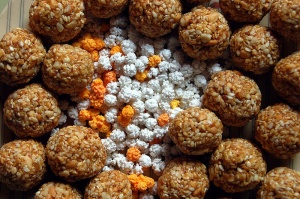 Importance of Til (sesame seeds) and Gur (jaggery)

Til and Gur are essential items of this festival. According to Hindu scriptures, those who apply til oil or bathe in water mixed with til or make offerings of til are liberated of all sins. Theses seeds of til have great capabilities to attract and emanate Sattva frequencies. So, eating ladoos or sweets made of til and jaggery improves spiritual knowledge. The concept of exchanging these sweet is to disregard any ill-feelings and conflict and create a friendly atmosphere all around.

Makar Sankranti brings with it not only rituals and traditional delicacies but various fairs or melas are also held during this time. The most famous being the Kumbh Mela that is held every 12 years at only one of the four locations, namely Prayag, Haridwar, Ujjain and Nashik. The Magh Mela at Prayag, the Gangasagar Mela, Tusu Mela of Jarkhand, Makar Mela of Orissa and Poush Mela of West Bengal are some of the major 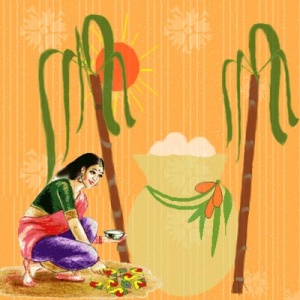 attractions of the season.

The Poush mela is a famous annual fair in the land of Tagore, Shantiniketan in Birbhum district of West Bengal. It starts on the 7th day of the month of Poush and is celebrated for a period of three days. This mela is an important platform for various artisans of nearby villages having expertise in creating beautiful handicraft items. These items are sold to people who gather here from various parts of India and abroad.

The chief characteristic of this mela is that it offers live performances of Bengali folk music specially the Baul songs. Singers and artisans flock here to showcase their talents and seek an opportunity to reach out to different parts of the world. From a simple whistle worth a few rupees to the latest electronic gadgets, you will find everything here. Ornaments made of terra-cotta; palm leaf, sham trinkets, and other decorative artifacts are sold in plenty. You will also find batik printed leather goods, slippers, bags in various stalls in the mela.

Food and Other Delicacies:

Food and festivity is what Makar Sankranti is all about. The harvest festival is celebrated in different parts of India with a wide variety of food that mainly consists of rice and til. On this day, Bengalis celebrate by eating their hearts with traditional sweet dishes. Paatishapta, a kind of sweet crepe or pancake is made by stuffing it with khoya, coconut and jiggery. Puli pitha is also a Bengali specialty. It is a sweet dumpling that is dipped in creamy milk. Sweets like gajar ka hal 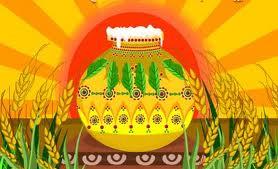 Makar Sankranti or Poush Sankranti is celebrated in different styles all over India and it is associated with nature, the season change and agriculture. Since all the three things are the base of human life, this day, the Sun God is worshiped as it is called the spirit of material as well as immaterial element. Though the festival has different names in different regions, the ways of celebration and the various dishes prepared and the ingredients used are just the same.

Celebrated on 14th of January every year, Makar Sankranti or Poush Sankranti is a festival of new beginnings. People worship the Sun God and believe that the festival represents a period of peace, happiness and affluence. Sharing of sweets on this auspicious day fill lives with sweetness in the year to come.