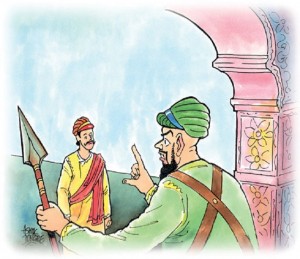 Akbar was a great king in India. He ruled over a large kingdom and was famous all over the country for being wise. He always welcomed clever people in his court and poets, musicians and teachers from various places. He had Nine gems in his court, but he liked Birbal the most. So how did Birbal come to King Akbar’s court? Here is how he came.

Birbal lived far away from Delhi. When he heard about the King he decided to go to the court and visit him. After a long journey, Birbal finally reached Delhi. He was happy to reach there, but as he tried to enter the city, he was stopped by the guards.

“Where are you going?” the guard asked. Birbal replied that he wanted to see the king and had come from a faraway place. The guard demanded a huge amount of money before letting him in.

Birbal had no money with him, nor did he have anything else. But his intelligence saved him. “I will share half of whatever I receive from the King, if he is pleased with me”.

Hearing this, the guard allowed Birbal to enter. He shared many stories and jokes with the king and Akbar was pleased as he had not laughed so much for a long time. “What do you wish to get from me? I will give anything that you ask.”

Birbal replied, “If you are pleased with me, my lord, then ask your guard to whip me a hundred strokes”. Everyone in the court was shocked to hear this as no one had ever chosen beating as a prize.

Akbar was unwilling to do this, as a whip was used to punish someone guilty. The courtiers laughed and commented, “He thinks the whip can help him to improve his mind and make him wise.” Birbal turned towards them, “Yes, you are right.”

Akbar finally agreed to Birbal’s wish and asked the guard to proceed with the whip. After fifty strokes, Birbal shouted “Stop!” Everyone thought that he had changed his mind. But Birbal asked the King to bring his friend before him whom he had promised half of his share.

Orders were sent and the guard at the gate was brought. The kind was amazed to see the guard before him. Birbal explained how the guard had asked for money before he could allow him to enter and how he had promised to share with him whatever he received from the king.

“He demanded money from you?” said the king. Birbal replied “He told me that it was a custom and the strangers had to pay some money before visiting the king.” Many courtiers shared similar experiences.

The King was very angry and asked to pay half the prize and even ordered that each stoke should be harder than before. The guard was very confused about what was going on. Birbal made it clear that he had received a hundred strokes of the whip from the king and the guard will receive half of it as his share.

The guard was whipped fifty times and he realized how wrong it was to take payments from strangers.

The king was very pleased with Birbal. He gave him land and money and asked him to stay in the court.