The Ghee Merchants and the Gold Mohur 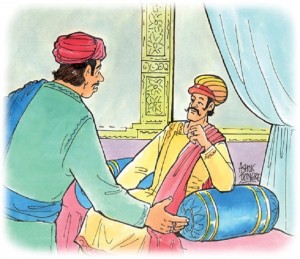 Birbal was very popular for his wisdom and so King Akbar often asked him to settle feuds among people. Even the judges would send difficult cases to him to solve.

One day, a ghee merchant came to Birbal and said that he had lent a thousand rupees to one of his friends in need of money. But now he refuses to pay the amount and even denies of borrowing some money from him.

“Do you have a receipt for it or was anyone present before both of you during the transaction?” asked Birbal. The man gave a negative reply and told that “We often help each other without any formal agreement, but this time my own friend has betrayed me.”

“Write down whatever you say and sign it”, asked Birbal. “I shall think over it and tell you what has to be done.” The merchant went away after signing the statement.

The next day, Birbal sent for the other merchant. When he was shown the statement, he began “How bad the world is! Even my friend does not tell the truth?” Birbal was surprised and said “You mean, you have not borrowed any money from him?”

“No, instead I have helped him many times. My business has expanded, but his has not. So he is trying to accuse me falsely.”

Since there was no proof and no receipt, Birbal had to allow the merchant go. The next day, Birbal bought two tins of ghee and sent them to both the merchants asking them to sell it for him as it was not pure and bring the money.

The merchants after reaching their shop poured the ghee into a pot and started to heat it. While doing this they discovered a gold mohur in the tin. The first merchant immediately took the mohur to Birbal. “This gold mohur was in the tin by mistake”, he said and returned the mohur. Birbal was now sure that he was an honest man.

The second merchant also found a gold mohur inside the tin, but he decided to keep it with him. He asked his son to keep it carefully and give it when required.

After having sold the ghee, both the merchants gave the money to Birbal.

Birbal thanked the first merchant and allowed him to go, but he asked the second, “The tin had one and half maunds of ghee, but you have given me the money of only one maund.” The man replied, “No, my lord, I had weighed it before selling and my son was there at the time.”

Birbal then asked him to wait and went inside the room. He asked a servant to go to the second merchant’s home and bring his son and the gold mohur that he had found in the tin.

The boy turned to his father and asked, “Why did you tell a lie, Father? You game me only one to keep for you.”

Understanding that the merchant was caught of his misdeed, he tried to save himself. “You must be dreaming. I remember that I gave you the gold mohur, it was from a man who visited my shop.”

Hearing this, Birbal said, “It was no dream. I put the mohur in the tin to test if you are honest.”

“Maybe I forgot what actually happened. Why should I keep someone’s money?” saying this, the merchant asked the boy to give back the gold mohur.

Bribal took it from the boy and said, “You have returned my money, but what about the money that you had borrowed from your friend?”

Hearing this, the boy broke, “You haven’t returned the money yet, Father?”

The merchant shouted at him and asked him to keep quiet, but Birbal asked him to tell what he knew. The boy then described how his father had borrowed one thousand rupees from the first merchant and promised to pay back soon.

Birbal then asked the merchant to speak the truth and learn a lesson from his son. “Your son is more honest than you.”

Seeing that he was caught of his misdeeds, the merchant agreed to pay back a thousand rupees to his friend. In this way Birbal became famous for his wisdom and for discovering who was honest and who was not.