Every year on the second day of the lunar fortnight in the month of June or July, Rath Yatra or Chariot festival is a major Hindu festival that is celebrated all over India. It is the celebration of the journey of Lord Jagannath, who is believed to be the Lord of the Universe, with his elder brother Balabhadra and sister Subhadra from his temple in Puri to his aunt’s temple Gundicha Temple that is about 2 kms from there. The Puri Rath Yatra is world famous and during this period the place attracts more than one million pilgrims from different parts of the world. Devotees who are not allowed into the temple have a great chance to see the deities. 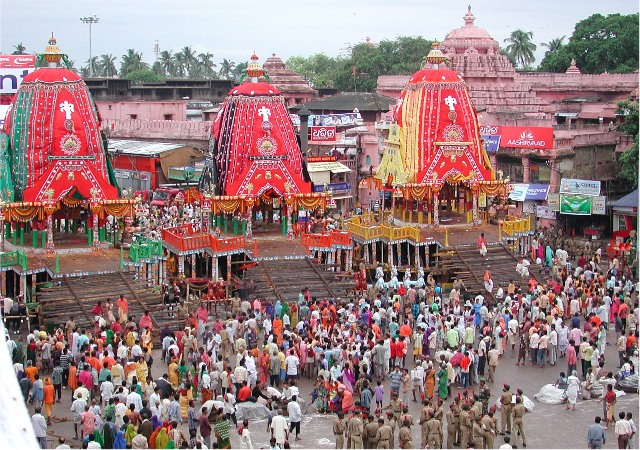 The 3 deities, Lord Jagannath, Lord Balabhadra and their sister Subhadra are taken to the streets in grand procession in specially made gigantic temple like chariots called raths that are pulled by thousands of devotees.  This festival is also known as Car festival, Dashavatar yatra, Gundicha jatra, Navadina yatra and Ghosa jatra. Celebrated with great enthusiasm, joy and happiness, this festival comprises the construction and decoration of the chariots by the devotees and volunteers.

The Origin of Odisha Ratha Yatra

Many mythical stories are related with Ratha Yatra at Puri that reflect the socio religious beliefs and thinking of the people of that region. The most important one are:

To kill Lord Krishna and Balaram, their maternal uncle invited them to Mathura and sent a chariot to Gokul. Both of them sat on the chariot and started for Mathura. It is said that the devotees observe this day of departure as Jagannatha Ratha yatra.

Once Lord Krishna’s eight queens requested mother Rohini to tell them about the various episodes of Lord Krishna with the Gopis. Considering that Subhadra should not hear such episodes, she sent her to guard the palace doorway.  But soon Subhadra was absorbed in the Vrajkatha. When Lord Krishna and Balaram arrived, she prevented them from entering with arms wide apart. However Rohini’s katha engrossed them all and at that time Narad arrived and seeing them standing still, he prayed that the three may give darshan in this manner forever, which was granted and the three eternally resides in the Jagannath temple in Puri.

Yatra is considered to be a famous ritual part of the Hindu religion. There are two types: one is that is performed by the devotees abound the temple and the other is the chariot yatra where the Hindu deities move in a chariot from one temple to another. According to the spiritual significance of the festival, it talks about the Human body as Rath and the driver or sarathi as God. The wheels signify velour and the horses persistence. They are also symbols of self discipline, tolerance, discrimination and charity while the reins of horses are symbols of pity, forgiveness and equanimity.

People eagerly touch the chariot and even pull the ropes as it is believed that by doing this, one can be blessed by the God. Devotees also sing special songs on this day. Earlier people used to throw themselves before the chariot as it was believed that getting crushed under the sixteen wheels of the chariot was to go straight to heaven.

Celebration of Ratha Yatra at Puri:

The festival celebration includes decoration of three huge chariots that resembles the temple structures at Puri. It is conducted for nine days by the Hindu devotees where Lord Jagannath, Lord Balaram and Goddess Subhadra start for a holy journey to the Gundicha Temple. People sing devotional songs and beat drums and trumpets and other musical instruments.

Puri Rath Yatra 2015 is due on 18th July, Saturday and if you truly want to experience the festival and have a glimpse of this legendary celebration, then plan today and gather more information online.