Pongal: A Guide to Know About the Festival

In India majority of the people live in villages and they are solely dependent on agriculture. It is due to this, that most Hindu festivals are related to harvest and related agricultural activities. Pongal is the most important and popular festival of Tamil Nadu, which is celebrated every year in mid January to mark the harvest of crops and to thank the Sun, Earth and the Cattle.

Pongal festival normally falls on 13th or 14th and lasts for four days. It is this time of the year that marks the return of the sun to the Northern hemisphere. Celebrated with much enthusiasm, it marks the auspicious beginning of Uttarayan, when the earth moves towards the sun for a six month period. 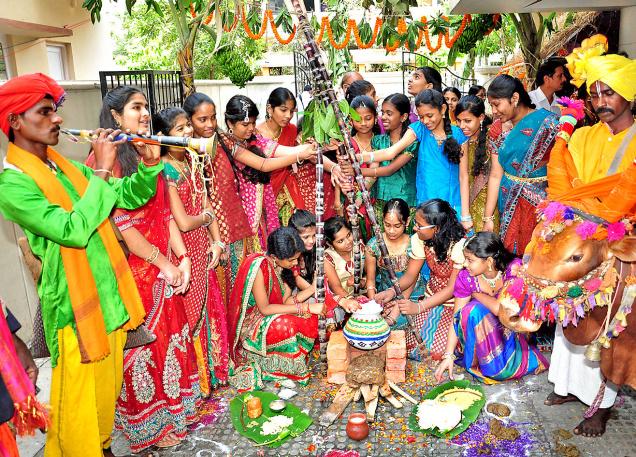 Pongal has got its name from the word “Ponga” which means “boil” and so Pongal denotes ‘spillover’ or something which is overflowing. The festival is held during the season when cereals, rice, sugarcane and turmeric are harvested and new rice is cooked in pots till they overflow which symbolizes prosperity and abundance.

Pongal is an ancient festival of South India that can be traced to the Sangam Age i.e 200 B.C.to 300 A.D. the festival originated as a Dravidian Harvest festival and has special mention in Puranas. Historians have identified it with the Thai Un and Thai Niradal, which were celebrated during the Sangam Age.

Thai Niradal was a major festival of the Pallavas who reigned during the 4th to 8th Century AD. During the celebration, young girls prayed for rain and abundance in the country. They avoided milk or any milk products, did not oil their hair and ceased from using any harsh words while talking. Women took an early bath and worshipped Goddess Katyayani. Their penance ended on the first day of the month of Thai and this was done to bring rain for the paddy fields. This customs gave rise to Pongal celebrations.

There are various legendary stories associated with Pongal celebration and here are two most popular ones related to Lord Indra and Lord Shiva.

Lord Indra and Lord Krishna are also related to Pongal festival. It is said that Lord Indra had become very arrogant after becoming the King of all deities and to teach him a lesson Lord Krishna asked all the cowherds to stop praying and worshipping him. This angered Lord Indra and he sent his clouds for thunder storm which lasted for 3 continuous days. There was flood all around, and to save all the people Lord Krishna lifted Mount Govardhan. Lord Indra realized his mistake.

Another legend says Lord Shiva once asked his bull, Basava to go to the earth and ask people to have an oil massage and bath every day and eat once a month. But Basava made a mistake and announced that everyone should eat every day and take an oil bath once a month. This angered Lord Shiva and he banished Basava and asked him to live on earth forever and plough the field and help the farmers to produce more crops. Thus, cattle got associated and are worshiped during Pongal. 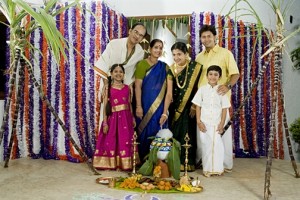 The festival is a four day long celebration and people of Tamil Nadu express their gratitude for the good harvest to the Gods. On the first day the Bhogi festival is organized in honor of Lord Indra and homage is paid for giving rain and bringing prosperity to the land. A bonfire is lit where agricultural wastes are burnt and girls dance around the bonfire singing songs praising the gods.

On the second day, the puja is performed when rice is boiled in milk in earthen pots and is offered to the sun god. People wear traditional dress and perform the puja with great devotion. A turmeric plant is tied around the pot where the rice is boiled. Other offerings also include two sugarcane sticks, coconut and bananas. People take an early bath and prepare lip smacking Pongal dishes .Women use white lime powder to create beautiful Pongal rangoli before the house.

The third day known as Mattu Pongal is the day when cattle are worshipped. Colorful beads, bells and flower garlands are tied around their neck of the cattle. The entire environment is filled with festivity and fun. Arati is performed to ward off the evil eye.

The fourth day known as the Kannum Pongal is the day when turmeric leaf is washed and placed on the ground. The leftovers of sweet Pongal and venn Pongal are placed on them with red colored rice, betel leaves, betel nuts, sugarcane and plantains. Women take an early bath in the morning and perform this ritual and all the family members assemble in the courtyard and arati is performed for the brothers.

When is Pongal this year?

This year, Pongal will be celebrated from January 14th to January 17th by the people of Tamil Nadu.