India is a land of various cultures and traditions and each state has their own festivals to celebrate all through the year. The Indian national calendar for the Hindus reflects a host of New Year festivities in the month of April that are unique to particular regions of the vast land. People of different states celebrate their new year in their own ways and not all of them fall on the same day. In Maharashtra, the New Year is known as Gudi Padwa and in Andhra Pradesh and Karnataka it is known as Ugadi and both the festivals are observed on the same day. 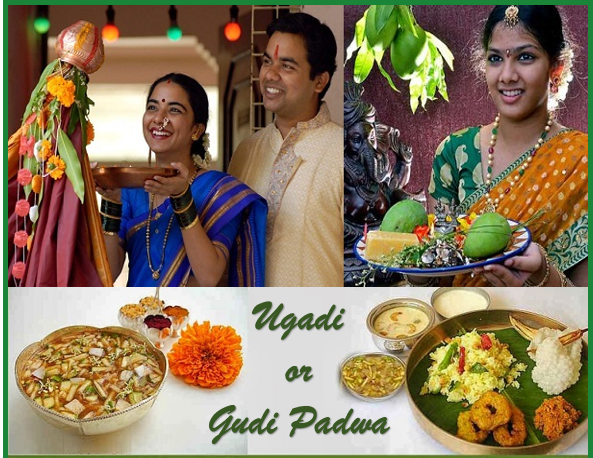 Ugadi festival marks the beginning of the New Year and falls on Chairta Shukla Pratipada.  People in Karnataka and Andhra Pradesh in the South of India believe that Lord Brahma started the creation of the universe from this auspicious day of Ugadi and so people perform various rituals for the New Year by cleaning and washing their houses and also purchasing new clothes. The festival welcomes the spring season when the nature also seems to be immersed in the festive mood and there are new leaves and flowers that manifold the Ugadi spirit. Leaving behind the past, it is the day to set things rolling for a successful beginning. 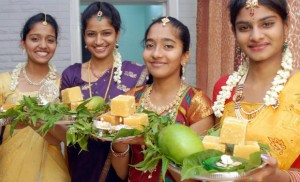 On this Ugadi festival, Telugu people decorate their houses with beautiful rangoli designs and with strings of mango leaves that represent good crop. They pray to the god for a prosperous and happy new year. They visit the temples and listen to Panchangasravanam as the priest makes predictions for the coming year. Ugadi Pacchadi is a special dish that is prepared and it has six different tastes from sweet to bitter and this is the first dish that is eaten by the devotees. This special dish is prepared with neem buds, salt, tamarind juice, jaggery, green chilli and raw mangoes. The dish signifies the various experiences of life. Besides visiting the temples and listening to the future predictions, family gatherings and feasts are also organized on this auspicious day.

Gudi Padwa: A much awaited celebration:

Gudi Padwa is the New Year celebrated by the Maharashtrians on the same day as Ugadi and it holds a special story that reflects the customs and traditions of the state. The first day of the Chaitra month is celebrated as Gudi padwa and marks the descent of spring season. It is also a harvest festival that shows the end of Rabi crops for the season. This is the time when mangoes are reaped. There are various reasons for celebrating this festival and the Gudi Padwa history say that this is the day when Lord Ram Chandra killed the ape king Vali and made Sugriv the king of Kishkindha. This is also the same day when Lord Ram returned back to Ayodhya after killing the demon King Ravana after one year. 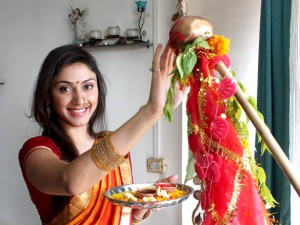 There are various stories associated with the Gudi Padwa festival and another such story is that Gudi is hoisted on this day to celebrate the numerous victories of Shivaji Maharaj, it is considered to be a symbol of victory and the Gudi is decorated with mango leaves, garland, yellow silk cloth, red flowers and is considered to be holy and auspicious. People get up early in the morning and take a bath and wear new clothes. They decorate their houses with beautiful rangoli patterns and a silk banner or the gudi is raised and worshipped.

Great care is taken while hoisting the Gudi and it is usually raised next to the main entrance of the house and also on the right side as it represents the active state of the soul. The area is cleaned and a swastika symbol is made. Turmeric and vermilion is applied at the center of the Swastik and while raising the Gudi, the Lord Brahma is invoked and prayed.

This year Gudi Padwa and Ugadi festival 2016 will be celebrated on the 8th of April and people have already started preparations for the festival. This special day marks the beginning of the New Year and is considered auspicious for starting any work.