Krishnadevaraya was extremely fond of horses. Whenever it came to buying well bred horses, he never used to think about spending money and would buy horses instantly. He was quite renowned to have the country’s best horses with him. 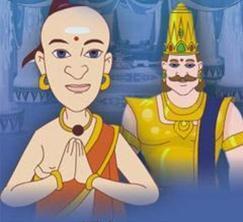 One day, an Arabian horse trader visited his court and said that he had got some very fine horses for sale. As those horses were amongst the best Arabian steeds that one can get in the whole world, he wanted to show one of them to the king. The king became elated with the offer and saw the wonderful horse standing outside his palace. He immediately said that he will buy the whole lot of them. The man then took an advance of 5000 gold coins and assured that he will return with the whole set of the horses in just two days and went away.

Days passed and gradually it was two weeks since the man had gone. The king was becoming a little restless and thought to spend some time in his garden. There he saw Raman sitting in a corner and writing something on a paper, with great excitement.

He asked Raman what was he writing, but Raman continued to write without listening to the King’s words. This made him all the more curious and he commanded Raman to show what was he writing without any delay. Raman said that the King might not like it as he was making a list of the greatest fools in the empire.

The Emperor took the paper from Raman’s hands to see the names that were there. As soon as he saw his name to be at the top of the list, he shouted at Raman with anger that how dare he wrote the King’s name in the list. He became annoyed finding that Raman considers him as a fool.

Listening to the King’s raging words, Raman said that any man who would give 5000 gold coins to a complete stranger and believe that he will return is definitely a fool.

The King said that what if the man returns, in that case Raman would be wrong.

Raman asserted with a twinkle in his eyes, that in that case, he will scratch out the King’s name and put the man’s name in its place. The King then understood the wise remarks made by Raman and decided that he would never make any major decisions in his life without consulting his intelligent courtier.