The Tale of the Two Parrots 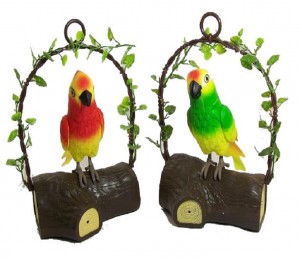 Once upon a time, there were two parrots, who loved travelling to far off places in search of food. These two beautiful parrots were brothers, and were called Radha and Potthapada. One day, they entered a palace garden and got trapped.

Both of them were later taken to the King. The King could not take his eyes off the stunning parrots and ordered his men to keep them in a cage, exclusively made of gold. He also asked to feed them with the food they love.

Radha and Potthapada soon became the pride of the King’s palace. Everyone was mesmerised with their splendour and royal guests used to stand before the cage and admire the birds. Everything was going fantastically well for the parrots and they were living comfortably in the palace.

But one day, an ape was brought to the palace. He was ugly and huge and was called Kalabahu. Before long, everyone started to shower their attention to Kalabahu and started ignoring the parrots. The ape’s antics and actions amused the spectators and everyone used to laugh after seeing them. This resulted in a feeling of neglect amongst the parrots. In fact, the King’s men did not even bother to feed the parrots on time.

Potthapada, who was the younger one amongst the two parrots, got deeply hurt due to all this. One day he told his elder brother that they should leave the palace and go somewhere else, as nobody cared for them any longer. Listening to this, Radha, who was not only the elder one, but also the wiser one amongst the two, said that Potthapada should not feel bad about all this. He said that attention, praise and blame, as well as honour and dishonour all are momentary in one’s life. He advised his younger brother to not be concerned about all these things much. He said that people will soon understand their worth, when they will get bored of the ape’s antics.

Just as he said, in a few days, people started disliking the ape, because he began to misbehave with them. The King also detested his offensive behaviour and ordered him to be sent back to the forest. Gradually, people again started focussing their attention towards the well behaved and beautiful parrots.

You may not know it, but the intelligent Radha was nobody else than Buddha in one of his earlier births.

Moral of the story: True worth and good deeds will get their due, sooner or later.