Long ago, it was Krishnadeva Rai’s mother’s death anniversary and he decided to do something special for his deceased mother. He called the head priest to discuss what can be done to pay homage to the departed soul. The head priest thought it to be a great opportunity to earn money. He asked about the king’s mother’s last wish. The king said that his mother used to love the mango fruit a lot and on her last day as well, she wanted to eat a mango. But by the time the fruits reached her, she had passed away. 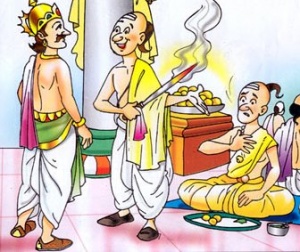 When the priest heard about the royal mother’s last wish he said that his mother’s last wish needs to be fulfilled so that her soul can rest in peace. For this, the kind should donate 108 mangoes which should be made of pure gold and placed in 108 silver bowls. These 108 mangoes should be given to 108 Brahmins in alms. The king took no time and readily agreed to what the shrewd priest suggested. Before long, 108 golden mangoes were made and were distributed amongst the Brahmins.

When Tenaliram heard about all this, he at once realised that the priest had made a fool of the king by playing with his feelings towards his mother. He decided to teach the priest a good lesson.

One day, Tenaliram called the head priest and told him that he wanted to give alms so as to please the soul of his late mother. The priest became happy, thinking it to be another opportunity to fill his pockets. Tenaliram also requested Krishnadeva Rai to attend the ceremony.

When everybody had come to the ceremony, Tenaliram took a red hot poker and went towards the head priest. He said that his mother was suffering from severe pain before her death and wanted a red hot poker to be placed on her hand. But, before her wished could have been fulfilled, she breathed her last. Thus, to make her soul rest in peace, he requested the priest to let him perform the act on him, along with all the Brahmins whom he had brought along with him.

Hearing this, the head priest as well as all the other Brahmins disappeared from the ceremony, giving different excuses to Tenaliram. The king then came to know that he was tricked by the head priest and thanked Tenaliram for making him understand the true character of the head priest.