There is no denying the fact that Krishna Deva Raya was the greatest king of India during his time. He was keen to preserve this status of his during his reign. Some of the ministers and courtiers in the King’s empire exploited this weakness of the King by continually making him spend his treasury to obtain new and exotic items from across the King’s kingdom and abroad. 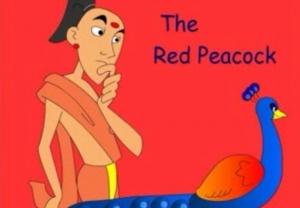 The wise minister, Tenali Ram, was well aware of this problem. He knew that if he will bring the problem directly to the King’s attention, he will have to bear his anger. But he also knew that Krishna Deva Raya was an intelligent ruler, so Tenali Ram waited for the right time when he can point out to the King his flaw so that he can make the much needed amends.

The shrewd ministers and corrupt courtiers were having a great time at the court as they continued to increase their money by presenting fake and worthless objects as invaluable treasures in front of the King.

Chatur Pandit was the leader of those greedy ministers. He was always on the lookout of new fangled ways to trick the King and lure money from him.

One day, Chatur Pandit arrived at the King’s court with a red peacock. The King was amazed to see the spectacle, and so was the entire court.

The King said that he had never seen such an extraordinary and wonderful creature in his life. Sensing that it was the right moment, Chatur Pandit said that it is a pleasure for him to add to the royal menagerie this rarest of the birds. He told that his servants have been searching for this rare specie for the last two years. They finally snared it from the densest jungles of Mukhya Pradesh.

Tenali Ram was witnessing all this drama with a gentle smile dancing on his lips. As he was well-versed in the natural sciences, he knew that a Red Peacock is either a rare mutant or is nothing but a fake creature created to fool the King. He kept on witnessing the bird very carefully.

King Krishna Deva Raya was highly impressed with Chatur’s presentation and asked him what reward did he want.

The cunning minister said that he just need the King’s blessing, but it would be great if the King can refund him the wealth he had to spend in order to fund the laborious voyage that was done to find the creature. The King readily agreed. On hearing the King’s approval, Chatur Pandit demanded one hundred gold coins without any sort of delay.

On hearing this, Tenali Ram interjected and said that he would like to bring the Red Peacock’s brothers and sisters from the densest jungles of Mukhya Pradesh, to the kingdom so that they all can live together and the King’s menagerie can be enhanced.

Krishna Deva Raya understood that Tenali was up to something meaningful, and thus gave his consent. Later, when the King and the other courtiers left the court, Tenali Ram walked over to the area were the peacock was displayed and picked up a feather that had fallen off. On looking at the feather, it became clear to him that the red colour had been painted on.

He then decided to not to attend the court for the next ten days. This made Chatur Pandit extremely anxious, while Tenali Ram had not left the town. He had asked his spies to find the painter whom Chatur Pandit had employed to create the Red Peacock. The painter was found and when he was taken to Tenali’s house, he became terrified.

On sensing his fear, Tenali Ram calmed him down by stating that he was not aware of the intentions of Chatur Pandit. In fact, he did such a great work that the King and all the courtiers were convinced that the peacock was naturally red. So, he said that he wants him to paint ten more peacocks in the same manner and he will be rewarded for his hard work and efforts.

On the 14th day after the search for the Red Peacocks was sanctioned, a poster was place outside the palace announcing that the Minister Tenali Ram has returned with the family of the Red Peacocks and they will be displayed that very day at the court of the Living Legend Emperor Krishna Deva Raya.

The palace got full of people who wanted to witness the rare sight.

Tenali Ram addressed the King with a greeting and told him that he had found all the specimens as promised. The King said that he rewards Tenali with one thousand gold coins as the price of these ten red peacocks.

But Tenali Ram said that the actual price of these ten peacocks is nothing but a bucket of water, a bag of red ochre powder and one gold coin to reward the skill and labour of the artist. He then pointed towards the painter who had come along with him.

Chatur Pandit got extremely frightened when he recognized the painter. He knew that he had been caught red-handed, and was thinking of the King’s anger and punishment.

While Krishna Deva Raya was about to order his soldiers to arrest Chatur Pandit, Tenali Ram intervened and said that all this has helped him bring an important matter to the King’s attention. He said that the king got so blinded by his desire for power and prestige that he was willing to accept that a red peacock could actually exist. He said that a lot of money from the treasury has been wasted in the acquisition of the exotic and the extraordinary. Whereas, the King should understand that his true prestige comes from the prosperity of every single citizen in his Kingdom, and not from the loud displays of wealth.

He then urged the king to spare Chatur Pandit and reward the painter who helped him bring the important matter to the King’s attention.

King understood the wise words of his brilliant minister and realized his grave mistake. He promised Tenali Ram that he would be more careful in future and also apologized to his citizens and courtiers for wasting the kingdom’s wealth to bring more prestige and status by seeking the extraordinary.

Chatur Pandit begged to the King for mercy, and was banished from the court for a month as a token punishment. He was also ordered to return all the previous gifts that he had received from the court.