Lohri: A Winter Celebration in Punjab

With temperatures ranging between 0-5 degrees Celsius and dense fog outside every morning, life seems to come to a halt in the northern part of India. But to our surprise, people belonging to the states of Punjab, Haryana and Uttar Pradesh keep busy making preparations for the much awaited bonfire festival- Lohri.

Lohri is basically a harvest festival that is celebrated with great enthusiasm and splendor. It is one of the most popular festivals of Punjab, especially for families where there has been a recent birth of a son or marriage. 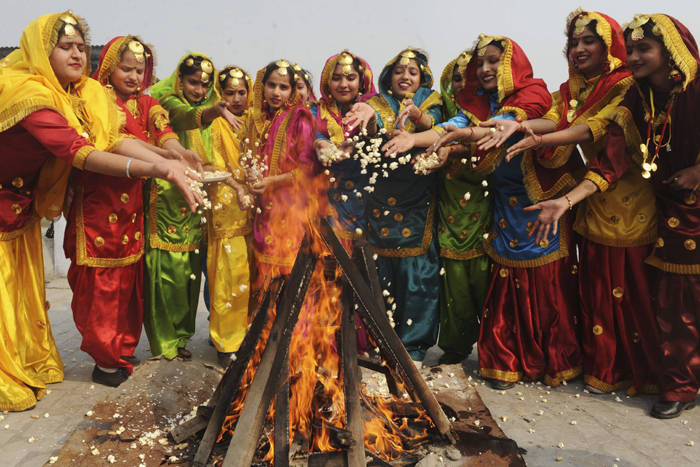 Festival of Lohri is related to the solar year where people worship fire and it is also dedicated to the Sun God. Celebrated on the 13th of January during the month of Poush or Magh, it is a day that comes before Makar Sankranti. According to the Hindu calendar, the festival is celebrated in mid-January when the earth is farthest from the sun and is about to start its journey of moving near the sun, thereby ending the winter season of the year.

The origin and history of Lohri-

The origin of Lohri festival goes back to the story of Dulla Bhatti, who was a Muslim highway robber living in Punjab during the time of Emperor Akbar. Besides robbing, he rescued many Hindu girls who were forcibly taken in the slave market to be sold in the Middle East. He also arranged their marriage and provided dowries. Slowly and slowly he became the hero of Punjabis and so every Lohri songs contain words expressing gratitude to him. Groups of boys chant the songs and ring the doorbells of houses. In return, people gave them peanuts, sesame seeds, gur and money. It is considered inauspicious to turn them empty handed.

How Lohri got its name-

It is believed that Lohri has got its name from Loi, wife of Sant kabir and others believe that the word comes from “Loh” which means thick iron tawa that is used to make chapattis for community feasts. Another story says that Holika and Lohri were sisters where Holika perished in the Holi fire and Lohri survived. Lohri festival involves puja around the fire and distribution of Prasad. The fire represents Agni, the spark of life and prosperity and abundant crops.

The importance of first Lohri- 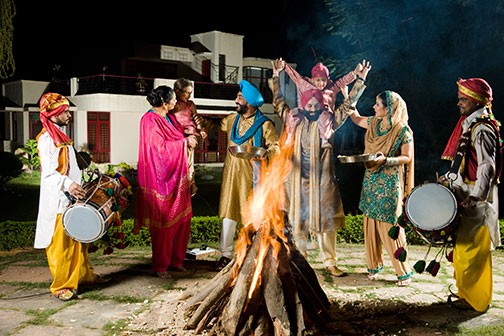 The celebration of Lohri holds special significance for newly webs and even new born babies.
For the new bride:

A big celebration is usually arranged for the newly married couples where relatives and friends are invited. Both the bride and the groom are dressed up in new clothes and the bride’s in-laws gift her new clothes and jewelry. Others guest who come to attend the celebration also offers clothes and cash to the couple and they seek the blessings of the elders.

For a new born baby:

The first Lohri of a newborn baby is also an important occasion for the family and it is here that the new mother sits wearing heavy clothes and jewelry and apply mehndi designs on hands. She holds the baby in her arms and family members and close relatives offer her clothes and cash. The maternal grandparents of the baby also send clothes, fruits, peanuts and sweets for the baby and the mother.

Much ahead of the final day of Lohri celebration, people start to gather pieces of wood for the bonfire and on the day, people gather around the fire and sing and dance. They even throw puffed rice, sweets and popcorns into the fire and distribute til, gazak, moongphali, popcorn as Prasad. The farmers seek blessings from the fire god for abundance and prosperity. Punjabis are sturdy, hardworking and fun loving and so most families arrange for feast together with the traditional bhangra dance while playing the instruments like the gidda and the dhol.

Lohri is a huge opportunity to bring the community together and take a small break from the busy schedule of life. The festival coincides with other celebrations of Makar Sankranti and Pongal and celebrates the spirit of unity and brother hood.

During the Lohri celebration people also indulge in traditional recipes that are especially prepared during the festival. Some winter savories include makki di roti and sarson da saag. People also prepare gobi pakore, dahi bhalle, phuliyan ke laddoo and til k ladoo, kurmure. Special dishes are made using sesame or til.