The Monkey and the Crocodile 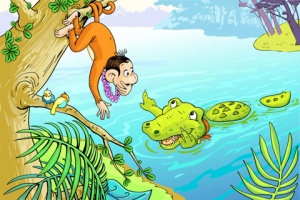 Once there was a Jamun (Blackberry) tree situated on the bank of a river. The tree bore extremely sweet and juicy Jamun fruits the entire year. A monkey named Raktamukha used to live on this tree.One day, a crocodile called Karalamukha who used to live in the river, decided to take some rest under the tree. Raktamukha observed the crocodile resting under the tree and offered him some Jamun fruits, considering him as a guest who has visited Raktamukha’s home.

Karalamukha loved this gesture of the monkey and became delighted to eat those sweet fruits. With this, their friendship began, and then Karalamukha came to the Jamun tree regularly, and used to enjoy those sweet Jamun fruits while spending some time with his friend. 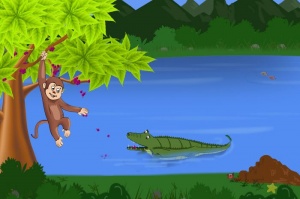 After few days had passed, Karalamukha said to Raktamukha that he would like to take some of the Jamun fruits to his place and present them to his wife, so that she could also taste the sweetness of these fruits and relish them. Upon hearing this, Raktamukha agreed at once and plucked some fruits for Karalamukha’s wife.

After reaching home when Karalamukha gifted those fruits to his wife and told her about his friend Raktamukha, his wife became elated. She thoroughly enjoyed those delectable fruits and asked her husband to bring the monkey’s heart, thinking that his heart would be more delicious than the fruits as he ate those fruits daily.

On hearing this, Karalamukha got angry and scolded his wife. He could not bear the fact that his wife asked him to kill his dear friend, who has been loyal to him all this while and who gave him such sweet fruits without thinking about himself.

But, his wife was adamant on her decision and tried to convince Karalamukha by any means. She first begged for the monkey’s heart, and when Karalamukha could not be persuaded, then she threatened him that she will not eat anything and will die if she will not get what she wished for.

Karalamukha finally gave in to her evil wish and with a heavy heart, decided to trick the monkey.

He met Raktamukha and asked him to come to his home as his wife has invited him for dinner, hearing the story of their great friendship. The monkey accepted the invitation and went ahead with Karalamukha. He sat on Karalamukha’s back and he carried him home which was deep in the water.

Raktamukha became frightened seeing so much of water around him, and requested Karalamukha to go slow. After hearing the monkey’s request, Karalamukha understood that he has the monkey under his control now as he will not be able to move away on his own. So, Karalamukha revealed his plan to the monkey and said that his wife wants to eat Raktamukha’s heart and he is taking him to his wife so that he can make her happy.

When Raktamukha heard about this plot that his friend had devised, he got shocked but did not lose his calm. He thought of a plan in his mind and asked the monkey to take him back to the tree as his heart is in the burrow of the tree.

The crocodile was a fool and fell into the monkey’s trap. He, at once, took Raktamukha to the Jamun tree thinking that his heart is actually under the tree. The moment they both reached the tree, the monkey jumped from the crocodile’s back and sat on a high branch of the tree.

On observing this, Karalamukha asked the monkey about the reason for the delay and told him to get his heart fast as his wife is waiting.

Raktamukha replied by telling him that he has his heart with him and no one can survive without a heart. He said Karalamukha that he is a fool and if he has deceived him, then the monkey also plotted a plan to run away from him. Raktamukha retorted and asked him to never come back to the tree again as he is an unfaithful friend.

The crocodile felt mortified and went away depressed, weeping because of his actions.

Moral of the Story: By using intelligence, one can overcome even difficult situations.