Once there was a famous adviser who was heading towards the king palace along with other advisers. On his way, he saw a dead mouse by the roadside. On seeing the dead mouse he said that one can even build a fortune by such a small beginning as this dead mouse, if he is committed towards hard work and makes good use of his intelligence. This way, one can even start a business and support a wife and family in the best possible manner. 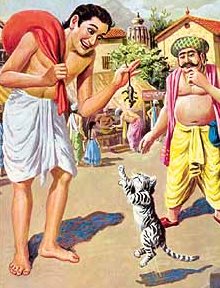 A passer-by heard the remark given by the great adviser. He thought that he must follow the words of the important adviser of the king, and picked up the dead mouse by the tail. He didn’t even cross a block that a shopkeeper stopped him and asked him to sell the dead mouse for his cat. He offered two copper coins for the mouse. The man readily agreed and sold the mouse to the shopkeeper.

This became a regular activity, until one day, when a terrible storm occurred. While walking by the king’s garden, the man observed that many branches had fallen off the trees due to the storm and were lying all around. So, he went to the king’s gardener and offered to clear those branches, only if he let him keep them. The lazy gardener quickly agreed.

The man then went to some children who were playing in a nearby park. The children happily agreed to gather the scattered branches in exchange of one sweet cake per child.

With the money earned form selling flowers and firewood, the man opened a refreshment shop. One day, when the local grass mowers were heading towards their homes, the man treated them with some sweet cakes and drinks. They were all surprised by his bigheartedness and asked him what does he want in return. He said he wants nothing at the moment, but he would let them know in the future if he would need anything from them.

Just after a week, he heard some great news that a horse dealer was coming to the city to sell five hundred horses. He contacted the grass mowers and told each one of them to give him a bundle of grass. He also requested them not to sell any grass to the horse dealer until he sells all that he has. Thus, he made more and more profit.

One day, a few customers in his refreshment shop told him about a new foreign ship that had docked in the harbour. Sensing it as a good opportunity, he came up with an intelligent business plan.

To begin with, he went to a friend who was a jeweller and bought a stunning ring with a wonderful ruby for a low price. He was aware of the fact that the ship came form a foreign country which had no rubies, and gold was also expensive in that land. So, the next step he took was to give that splendid ring to the captain of the ship as an advance on his commission which he will get if he will send all the passengers to the man. He would then take the customers to the premium shops in the city, and a receive commissions from the merchants for bringing customers to them.

Soon, the man became very rich when several ships had docked into the port. Being extremely happy with the progress he had made, he thought to give the adviser a gift, for all this began with his words only. So, he decided to give him a gift of 100,000 gold coins. This amount was half of his entire wealth. He then met with the king’s adviser and gave him the present and told him his entire story.

After listening to his story, the royal adviser thought that it would be great if his daughter marries this diligent man who is so talented that he has built a fortune with his hard work and commitment. He thought that when he will die, this man will be the best inheritor of his wealth and will take care of her daughter superbly.

The man agreed to marry the adviser’s daughter, and when the wise adviser died, the man became the richest man in the city. The king then appointed him as the new adviser, and he spend the rest of his life helping others openhandedly and by working for the happiness and welfare of others.

Moral of the Story: When you have the energy and ability, you can acquire great wealth even from small insignificant opportunities.