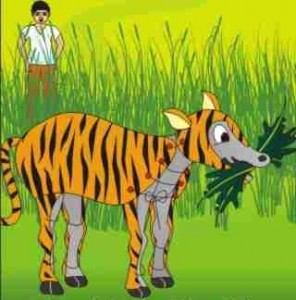 One day the washer man was going to another village because of some work. On the way, there lay a forest. When he was passing through that forest, he saw a dead tiger. Immediately an idea struck his mind. He shaved off the tiger’s skin.

When he returned home, he showed the tiger’s skin to his donkey and said, “You work for me whole day and night, still I can’t afford to give you much to eat because of my poor condition. I really regret for that. Now you should wear this tiger’s skin. Then you can roam freely in the fields every night and eat to your heart’s content. No one will dare to come near you, taking you as a tiger. “

The donkey was pleased to hear this. That night he put on the tiger’s skin and went to a farmer’s field. He ate to his fill. The farmer saw him but did not dare to do anything.

This went on for many days and soon the donkey grew healthy and strong.

One night, the donkey was grazing in a field as usual. Just then another donkey brayed. The donkey felt like replying to his brother’s call. Without thinking the pros and cons, the donkey also started braying. The villagers got alarmed. They rushed to the field where the donkey was braying. They understood everything and beat the donkey to death.

In the morning when the washer man arrived to the field looking for his donkey, he was shocked to see his beloved donkey dead on the ground. Overcome with grief, he could not figure out what had happened. After giving the situation much thought, the reason occurred to him. He sadly shook his head and said, “I wish he had kept quiet.”

Moral of The Story: Silence is golden