The Cave that Talked

Once there was a lion named Kharanakhara who was a ruler of a certain part in a jungle.

One day, while he was in search of a prey, he could not find any animal after roaming in the jungle for several hours. When his search went in vain, he thought of returning as sun was about to set. 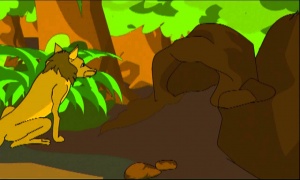 On his way, he crossed a big cave, and stopped there. He examined the cave and thought that it must be a dwelling of some animal because such a big and nice cave cannot be unoccupied. As the sunset was about to happen, he knew that whosoever resides in the cave will be coming back to the cave. So, he decided to enter the cave and wait for his food.

After sometime, a jackal was about to enter the cave, as it was its home. But, the clever jackal noticed the footsteps of a lion that were leading to the cave. The jackal got alert and saw that the footsteps were leading to the cave, but were not coming out. He then got alarmed and thought that if a lion has entered the cave, then he will surely be killed. But, in case there is no lion inside the cave, then he would be a fool to stay out and not enter his home. 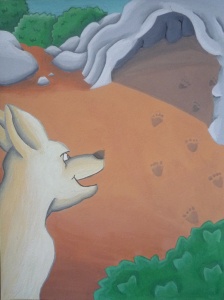 So, he devised a plan to ascertain whether a lion entered the cave or not. He stood out in front of the cave and began to shout in a loud voice, “Hello Cave! Hello Cave! Shall I come inside?”

He waited for some time and then again shouted, “Hello Cave! Did you forget our pact? We decided that I will only enter if you will reply. So why are you not replying? Don’t you want me to enter the cave? Shall I find another cave to live in?”

When the lion heard this, he thought that the cave and the jackal must be having an agreement wherein the cave has to reply before the jackal can enter the cave. He pondered that as he is in the cave, so it is not replying to the jackal, signalling him of the danger. Thinking this, he decided to invite the jackal to the cave on his own, else he will go away and the lion will not be able to have his food.

So, the lion responded from inside the cave, “Hello Jackal, you can surely enter. It is all safe inside.”
After listening to the scary reply from the cave, the jackal took no moment to understand that a lion is there inside the cave. Thus, he rushed from there as fast as he can, to save his life.

Moral of The Story: By using your intelligence, you can protect yourself from any potential harm.