The king of the crows, who was extremely distressed with this event, called a meeting. All the crows gathered to find a solution and finally came to a clever conclusion. They devised a plan and decided to put it into action from the very next day.

According to the plan, the following day, a rigged drama was performed close to the cave of the owls. The king of the crows beat an old crow in a fake bout, and some of the crows sprinkled a goat’s blood on the old crow to give more meaning to the drama and to give the impression that the crow has actually been beaten up. Then the entire clan of the crows left the old crow alone in a superficially miserable state. 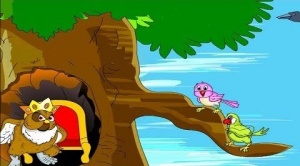 On seeing this, the owl king’s senior minister advised the owl king to welcome the wounded crow in their kingdom as the poor old crow was beaten up because he spoke in favour of the owls to his own king. The senior minister informed the owl king that the old crow had said that the owls belong to a superior race and are stronger and much more intelligent than the crows. All this resulted in the crow being thrown out of his group, and so, he must become a part of the owls’ clique. 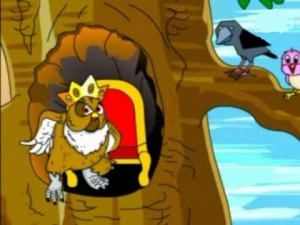 After listening to the entire matter in detail, the owl king came to the conclusion that the crow should be brought into their kingdom and the owls should help the crow to recover from his wounds. On receiving the king’s order, the old crow was brought into the cave.

Before long, the old crow created a positive image in the minds of the owls. Many of the owls and ministers of the owl’s kingdom used to favour the old crow on several matters. There were merely one or two owls who opposed the crow. They held the opinion that, an enemy is always an enemy. However, as the opposition was pretty weak, the crow sustained his position and continued staying with the owls. 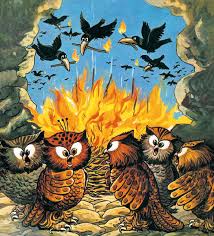 One day, the old crow got the opportunity he was waiting for. As it was day time, so the owls were unable to see anything due to the sunlight. It was this moment that the crow was in the quest of. He cleverly moved out of the owls’ cave and built a pile of numerous wooden logs at the mouth of the cave. Then, he set the logs on fire. The entire cave burst into flames and quickly the whole cave burnt to ashes, putting an end to the lives of all the owls that were inside the cave.

Moral of the Story: It does not matter how strong your opponent is, you can still win the battle by using your wisdom.