Once there was a Brahmin named Swabhavakripna who used to live alone in a small village. He had no friends or relatives, and was dependent on alms for his living. Being a miser that he was, he used to keep whatsoever food he received as alms in an earthen pot, and he used to hang the pot beside his bed. The Brahmin was highly vigilant of the pot and had food from it only when he was extremely starving. 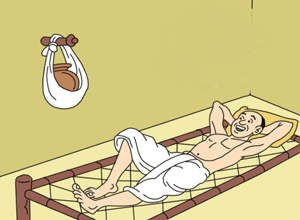 One fine day, he got a huge quantity of porridge. He filled the earthen pot with the porridge, and ate whatever remained. Being extremely elated with the thought that his pot has become so full, he just could not stop looking at the pot as he lay awake in his bed.

After constantly looking at the pot for a long time, he fell asleep. In his dreams, he saw the pot full of porridge and envisioned that the village was suffering heavily from famine. Sensing the opportunity that the pot full of porridge will bring to him, he became all the more happy. He sold the porridge for hundred silver coins. With the money so received, he bought a pair of goats. In a few months, the goats gave birth to kids and he then traded all the goats for some buffaloes and cows. 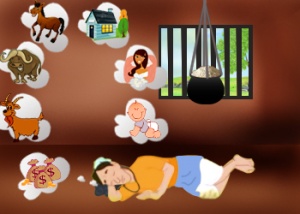 After some more time, the buffaloes and cows gave birth to kids as well and they gave plenty of milk. The Brahmin then started trading milk and milk products like butter, curd, etc. in the market. Gradually, he became a highly renowned and affluent man.

Continuing witnessing his vivid dreams, he bought some horses along with a large rectangular house with four buildings. On seeing Swabhavakripna’s opulence, another moneyed Brahmin gave his daughter’s marriage proposal to him. The Brahmin’s daughter was extremely beautiful and they both got married lavishly.

Later, his wife gave birth to a cute and adorable son, who was given the name Soma Sharma. Their son was tremendously mischievous. He used to shout and play all day long.

One day, the Brahmin asked his son to stop making noises and shouting, but he did not listen. Swabhavakripna’s wife also could not hear him shout as she was occupied with the household chores. On seeing this, Swabhavakripna became awfully angry and kicked his wife in fury. 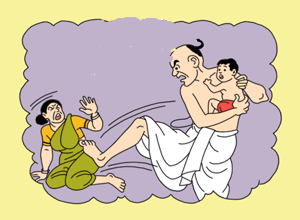 As this was nothing but a dream, but he actually kicked in air. While doing so, his leg hit the earthen pot which was full of porridge. On being hit, the pot got broken and all the porridge got trickled on the floor. This woke Swabhavakripna from his sleep and his dream vanished in a jiffy.

When he realized that he was dreaming all this while and the entire porridge full pot has now been broken, he felt devastated.

Moral of The Story: We should never build castles in the air.