Once upon a time, there lived four naive Brahmins, who were best of friends. They decided to gain some knowledge and study hard to be able to earn a living. Based on this decision, they went to a different town and joined a hermitage. 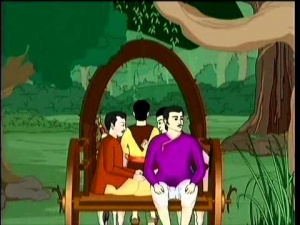 After twelve years of studying hard and mastering many fields of knowledge, they decided to leave the hermitage and thought of applying the gained knowledge. They took their Guru’s permission, and sought his blessings. Their Guru wished them all the success and they left the hermitage.

With all the Shastras (holy books of knowledge) with them, they begin their journey. After travelling for a few days, they reached a place where the path was divided into two different directions. They started pondering about the right path that should be taken to continue their journey.

In the meantime, a merchant’s son had died in a neighbouring town. While they were thinking about the path to be chosen, a huge funeral procession approached. There were many noticeable people in the procession and they were heading towards the cremation ground. 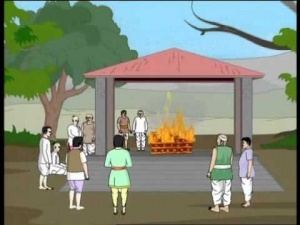 Referring to the scriptures, one of the Brahmins professed, “The right path to follow is the path taken by great men!” Hearing this, they joined the funeral procession.

After reaching the cremation ground, the Brahmins again started thinking about the next course of action to be taken. While having a discussion, they looked at a donkey in the vicinity. One Brahmin consulted the scriptures of the Shastras and stated, “A true friend is one who stands by you on all occasions. Be the occasion joyous or sad!” Hence, they thought the donkey to be their true friend and put their arms around his neck and adored him.

Consequently, they stopped the rushing camel and tied the donkey to the camel so as to lead their friend to righteousness. The camel hauled the donkey with him and went ahead with his journey.

The donkey’s master, who was a washerman, saw the four Brahmins tying his donkey to the camel. On seeing this, he got annoyed and rushed towards them with a stick in his hand.

On being followed by the infuriated washerman, the four Brahmins, ran to save their lives and found a river. They saw a leaf of a holy tree floating on the water of the river.

One of the Brahmins asserted, “Holiness carries one across the river of life!” He jumped into the river in haste, with a feeling that the holy leaf will help him cross the river. However, being unable to swim, he started drowning.

Another Brahmin, who observed his friend drowning, hopped into the river and caught his friend by the neck. Being swayed by the swiftly flowing river, he was unable to get hold of his friend. At that very moment he recollected from the scriptures, “When a wise man knows that total destruction is imminent, he would sacrifice half and work with the rest!” When this thought occurred in his mind, he didn’t think anything and cut his friend into half with his sword. This way, he got hold of the half body of his friend and dragged him to the river bank. However, by that time his friend had already died.

All the remaining Brahmins grieved for the loss of their friend, and then continued their journey. After wandering for quite more time, they entered a village where the cheerful villagers welcomed them in a very warm manner. They provided the Brahmins different houses to stay and three different families came forward to serve food to them.

One of the Brahmins was given sweet noodles. This Brahmin suddenly remembered from the scriptures, “Long tactics will surely take a man to destruction!” Based on this understanding of his, he did not eat the sweet noodles, and stayed hungry all through the night. 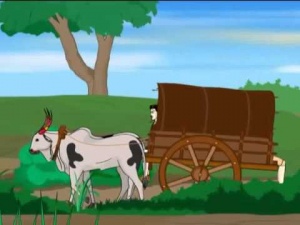 Another Brahmin was given a bowl of frothy soup to be taken. He remembered from the scriptures, “Whatever is frothy and distended, does not last long!” Consequently, he also did not eat the food, and decided to remain hungry throughout the night.

Next morning, when the villagers came to know that none of the Brahmins had the food served to them, they laughed on them and mocked them.The third Brahmin was served some flavoursome food with a hole in the centre. He reminisced from the scriptures, “Defects are an imminent sign of approaching danger!” Thus, he also did not eat the food, and stayed starving throughout the night.

Furiously, the three remaining learned fools left the village. As they were leaving the village, the villagers followed them for a long distance and kept on laughing, mocking and making fun of them, all that time.

Moral of The Story : Empty knowledge is an invitation to ridicule.