Once upon a time in a dense jungle, there was a beautiful lake. Many water creatures lived in it. There were fish, crabs, crocodiles and other animals that resided in the lake. Near to the lake, there lived a shrewd heron. He was very fond of eating fishes and crabs from the lake. But with time, he had grown old and had no strength left to hunt.

One day, he thought of a plan by which he could easily hunt and pray on fish and crabs. He went to the lake and started shedding crocodile tears. Some fish that were swimming there came up to him and asked, “Heron Uncle, what happened? Why are you crying? What made you so upset?”

The heron felt very happy to see so many fish but didn’t show it. He said in a gloomy voice, “I am very upset today. In future, I will never be able to see you people in this lake.”

“Why? What happened?” asked a fish. “What makes you say so?”

“In the morning, I met an astrologer. He said that this lake would soon dry up and all the lake-dwellers would die. I am very sad. I have decided to keep a fast to please God.”

All the fish got very scare 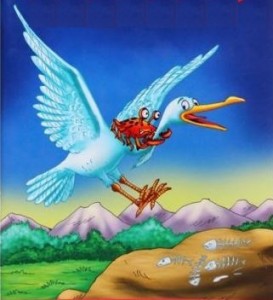 d. They quickly died in and went to their king. They told him all that the heron had said. The king also got tensed. One fish advised him, “I think that we better consult the heron. He is so concerned for us.”

The king agreed and they all went to the heron that was waiting impatiently on the bank. The king said to him, “My fish informed me what the astrologer told you. Can you suggest some way, so that we can save ourselves? Otherwise we will all die without water.”

The heron felt very happy in his heart seeing his plan succeeding. He said, “Yes, I can help you. There is a huge, deep blue lake at the edge of this jungle. I can take all of you there one by one. But for that you need to trust me. It will also take a lot of time. Now tell me what do you want? I am already on a fast to please God.”

The king said to the heron, “Uncle, we all fully trust you. Please take us to that lake. We will be very obliged to you. You are so concerned for us. You have kept a fast for our sake. Thank you so much.”

Now the shrewd heron started taking the fish to the lake at the edge of the jungle. But, actually, instead of taking them to the lake, he would take them to a rock cave and devour them.

One day an intelligent crab went to the heron and said, “Uncle, please take me also to the other lake. I don’t want to die.”

The heron agreed as he liked the taste of crabs too. The crab climbed on the back of the heron and the heron flew off. When th 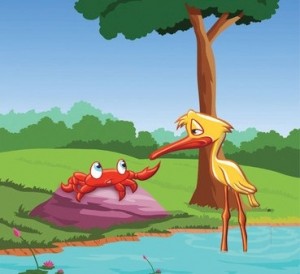 e heron reached near the rock cave, the crab saw fish bones scattered all over the surface of the cave.

He understood everything and got furious. He climbed to the heron’s neck and shouted, “You shrewd bird! So this is the other lake where you were bringing my brothers to? Now you will not be alive to eat any more fish.”

Saying so, the crab grabbed the heron’s neck in his claws and broke it. The heron died then and there and fell to the ground. The crab somehow dragged the head of the heron to the lake and told everyone about his ill scheme. The king of the fish thanked the crab for saving the life of the rest of the fish.

Moral of The Story : A hunter can never be a protector. We should be aware of shrewd minds.