Birbal Brings a Princess from Heaven 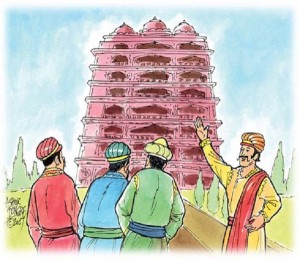 Long ago, when Akbar and Birbal shared a great relationship, the King told Birbal that he is one of the cleverest men he has ever met, and so, he wants him to do something which has never been done before and which will surprise the entire city. Birbal agreed but said that he would need some money for the same, as well as, a year’s time.

The King arranged for both the requests, and again told Birbal that it must be something that no one has ever seen or heard about before. He said that he would not be punished for it, no matter what it was. No other discussion was made about it, and the King got busy with other matters soon, forgetting about all this.

After a few days, a sad news reached to the King that Birbal was dying. He got very upset, and went to see Birbal himself. He saw him to be in a bad condition and agreed to look after his wife and children when he died, as per Birbal’s request. Two days later, the King got the news of Birbal’s demise. All the enemies of Birbal got happy with the news, but the King got really sad and ordered the entire court to go into mourning for a period of three days.

Being surprised, the King and all the courtiers stood up. Birbal then explained that it was him only. He said that after being dead, he was taken to the heaven. He performed a few good deeds there, and in return was permitted to go back to earth to serve the King.

Akbar got extremely elated with the news and asked his men to arrange for a grand welcome for Birbal.

Birbal then said that he has brought a beautiful princess along with him and some wonderful clothes from Heaven. The King asked him to bring them as well as the princess immediately.

Birbal replied that she is not an ordinary princess as she has come from heaven. Thus, she needs to be invited to the palace; and for this, all of them must go and bring her.

Akbar was eager to see the princess, but he was not sure if Birbal was telling the truth or not. Thus, he sent his Dewan (chief minister), along with some courtiers to find out the truth.

They all then accompanied Birbal to the forest and reached to a stunning palace which was red and gold in colour. Birbal then stopped at the gate.

He asked all the men to look at the window on the seventh floor, as the princess will appear there when he will call her. He called her but nobody came to the window.

The Dewan thought that his joke has now gone a little to far and asked him where is the princess. Birbal said that he forgot to tell them that the princess can only be seen by those who belonged to reputed families, whose wives are faithful, and who are pure and honest themselves.

He then asked him to look at the window again. The Dewan did not want that anyone should think that he is not from a good family or his wife is not true to him, or he is not honest. Consequently, he said that he can see the princess.

Likewise, the other courtiers also said the same. They all then returned to the King, and told him of the beauty of the palace and of the princess who was there in it. Akbar got very happy and called his men to arrange for a big procession to go into the forest. He went with Birbal first.

When the king reached the palace, he looked at the window which was pointed out to him by Birbal. Birbal said that the princess is looking at her from there. Akbar said that he could not see anyone.

Birbal then told the King what he had told the Dewan and the courtiers. Akbar also reacted in the same manner and said he could see the beautiful princess, and started to go inside. But, Birbal stopped him and said that they all need to take off their earthly clothes and put on the heavenly ones which he will give so that they can meet the princess.

Birbal then went alone inside the palace, and came out looking sad, saying that the princess is not willing to come out at the moment as she thinks it is not the right moment.

Akbar disliked this, but did not want to make the princess angry, so he said that they will all go back to the city then and he led the procession back to the city. While everyone was heading towards the city, only Akbar and Birbal were dressed. The others were wearing nothing at all.

As soon as they came near the city, the news quickly spread that the King’s men were not wearing anything at all. Some of the people thought that they had gone mad, others said that they had been robbed, and so, various things were being said.

At length, one of the courtiers could not suffer the embarrassment anymore and said to the Dewan that he may be low-born, not honest, and his wife may not be faithful to him, but this joke has gone on for too long. The Dewan asked him what did he mean.

The courtier then said that Birbal was making all of them a fool by doing all this as there are no heavenly clothes, and there is no princess as well.

The Dewan also agreed, and all of them decided to inform Akbar of Birbal’s plan. Birbal also thought that he should tell the truth to the King and spoke to him straightaway.

Birbal said that he has done something which no one else has ever done, by making the Dewan and the courtiers walk naked through the city. He said that even if they are angry with him, he cannot help it, and he trusts the King that he will protect him.

On listening to this, Akbar started to laugh. After all, the scene was quite hilarious!