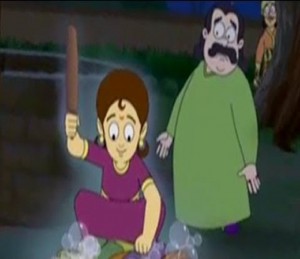 Once upon a time, King Akbar got ill. He was having a bad pain, so he called for a doctor. The doctor came at once to examine the King. Then he said that he can be cured by having a medicine, which will only work if taken with bull’s milk. After saying this, he took out a small bottle from his box and gave it to the King.

The King could not understand how can a bull give milk and asked the doctor about it. The doctor said that the King must order Birbal to get bull’s milk as he is very intelligent and nothing is impossible for him.

The doctor disliked Birbal, as he had put an end to some of the bad deeds that the doctor used to do and, thus, he was trying to put Birbal into trouble.

After the doctor was gone, King Akbar called Birbal and told him about what the doctor said. Birbal understood at once that the doctor was trying to create a trap for him. He asked the King how can a bull give milk. Listening to this, the King got angry and said that the doctor had advised that he should not take any female animal’s milk and so, Birbal should do as directed.

Birbal realised that it will be better not to argue with the King, and so, he bowed to him and went away. After reaching home, he had his meal and then sat thinking about the problem at hand. When he was lost in his thoughts, his daughter saw him stressed, and asked him what has happened.

First Birbal refused to tell anything to her, but later, when his daughter insisted a lot, he told her the entire story. She said that he need not worry as she will help her now in this.

The following night, when everyone was sleeping in the city, she collected a few old clothes, went to the bank of the river which was near the palace, and selected a spot to sit which was directly under the King’s bedroom window.

Then she started washing her clothes in the middle of the night, while beating them with a stick. As she was beating the clothes, she shouted along, and made loud noises of “Hoish, hoish!”.

On listening to the noises, the King got awake and became very angry. He sent one of the royal guards and ordered him to find out what was happening. The soldier reached to the girl and asked her what she was doing there. She said that she is washing clothes. The guard then said that this is not the time to wash clothes and who she actually was. She then replied that she is a human being, and if that is not enough, then she is a girl.

The soldier understood that she was trying to be clever and took her to the King. He told the King about the replies that she gave, and Akbar got very angry on hearing everything.

He then harshly asked the girl who she was and why was she washing her clothes outside the King’s window? The girl pretended to be scared and said that it was the only time that she could wash the clothes as her father gave birth to a boy in the afternoon. As she was busy all day because of that, and there were no clothes for the baby, so she had to come at the night to the river bank in order to wash the clothes.

On hearing the girl’s story, Akbar got even more angry and said that a man can not have a baby. So, is she making a fool of him?

She said that there are some strange things happening in the city of late, so may be this is why this has also happened. The King then asked her what was she trying to say.

The brave girl then replied that when the King himself orders someone to get bull’s milk for him, then why can’t a man have a baby?

Akbar took no time to understand everything, and, smilingly asked the girl is she had any relation with Birbal. She then said that she is his daughter. Being a just and fair minded king, he did not get angry on the young girl, but was amazed with her courage and intellect.

He asked her to go back to her home and tell her father that the King has received the bull’s milk. However, it needs to be given to the baby that Birbal has given birth to.

The girl said that her father might not believe her. So, Akbar got a paper and wrote on it that he has received the bull’s milk. He then signed underneath the statement and gave the paper to the girl.

Later, when Birbal showed the paper to the doctor, he got surprised and felt so ill himself that he could not attend the patients waiting for him and, instead went to his room to have some of his own medicine.