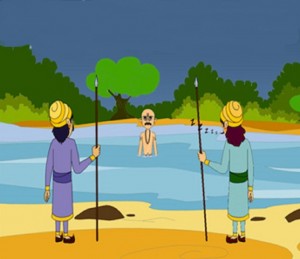 One day, during the winter season, Akbar and Birbal were taking a stroll. Suddenly, Birbal thought of something and asked the Emperor if a man can do anything for money. Listening to the question, the Emperor dipped his finger in the nearby pond, which was freezing, and drew out his finger at once. He said, that it is not possible to do anything for money, as no one can stand in the freezing water for a whole night, just for money. But, Birbal disagreed and said that he will find a man who can do so.

Akbar said that if someone does it, then he would gift him one thousand gold coins to him. The next day, Birbal took a man to the palace who was extremely poor and thin. He told the King that the man is ready to stand in the chilled pond for the entire night. The King asked some of his guards to accompany him and see if he does what is promised. The man kept his promised and went away.

The next day, he came back to the palace to claim his prize. Akbar confirmed if he actually stood there by asking his guards and they agreed that he did. Akbar then asked the man, how did he do it. The man said that at a distance there was a lamp post. So, he looked at it the entire night as a ray of hope and survived the chilling water.

Akbar then refused to give him the prize saying that the man got heat from the lamp, and was, thus, not worthy of the prize. The man got disappointed after hearing the King’s decision and went away. When the news reached Birbal, he did not like what the Emperor did.

Next day, he did not visit the court and Akbar got worried about him. He asked his men to bring him to the court. They went to bring him and came back with the message that he was cooking Khichri and will be available in the court only when he will cook it and eat it. Gradually, many hours passed and the Emperor got restless. He then decided to visit Birbal’s house on his own. 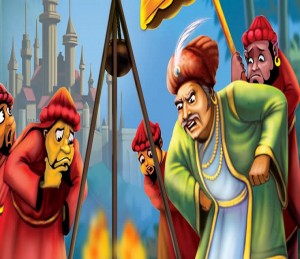 After reaching to his place, he saw that Birbal was sitting in his room in which fire was burning for cooking the Khichri, however, the pot was hanging somewhere around 8-10 feet higher from the burning fire. The King then asked Birbal what was all this. He replied that he is cooking Khichri. Listening to this, all the King’s men and the King himself started to laugh. Akbar said that in this way Khichri can not be cooked as there won’t be enough heat available to the pot.

Birbal replied that if a man can get heat from such a distance and can keep himself warm enough to stand in absolutely cold water for the entire night, then why is it that the Khichri can’t be cooked in this manner?

King understood what Birbal was trying to say and returned to the palace. Next day, the same poor man was called to the palace and was given his prize.