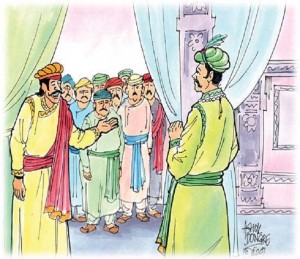 One day both Akbar and Birbal were talking together when the king said that he has met many wise and clever men, but only few foolish ones. It was easy to judge a wise man by his actions and words, but he was wondering how to judge a foolish person.

Birbal replied that there is no such difference between the judgments. A foolish man can also be judged by his actions and words.

The king agreed to this and asked Birbal to find ten most foolish men in the kingdom and bring them before him.

Hearing this, Birbal followed the orders and went out into the city. He met different kinds of men, some were rich, some were poor, some were weak or strong, but he could not find anyone why was foolish.

One day, he saw a man holding some hay on his own head and riding a horse. Seeing this, Birbal became very curious. He asked, “Why are you carrying the hay on your head?” The man replied that he has to keep his hands free to guide the horse. The horse was weak and so he could not put the hay on the back of the horse as it would fall down and die. Birbal took the man’s name and address immediately.

As he moved from that place, Birbal heard a man crying for help. He went closer to him and saw that the man was lying in mud, flat on his back and his hands held above his head. There was a space of about 3 feets between his hands.

Birbal was surprised to see this as the man could easily get up if he wished. He asked, “Why don’t you get up yourself?” The man replied that he couldn’t do that and wanted to be pulled up by his hair.

Birbal pulled him and asked him about his strange behavior. The man replied that he wanted a box to fit in a space in his house and so he took the measurement with his hand to give it to the box maker. He slipped in the mud and could not simply get up because he did not want to lose the measurement. This was the second foolish man in the list.

The next morning while on a walk, Birbal was knocked down by a man who came running. “Can’t you see where you are going?” asked Birbal angrily. The man replied that he was in a hurry as he had just said his prayers in the mosque and wanted to see how far his voice had reached. He was actually running after his voice. With this, Birbal found the third foolish man.

Not far from the places, he found two men quarrelling. They were about to fight when he stepped in and asked them to stop. He asked the reason behind the fight. One of them said “What has my buffalo done that he wants to set loose his tiger on her?” Birbal, seeing no buffalo and tiger anywhere was very confused and wanted them to explain in details.

The story was that both men were walking along and they thought of their wish that would be fulfilled by God if he appeared suddenly. One of them wished for a buffalo as there was trouble having milk. Hearing this, the other man wished for a tiger so that it could eat up the buffalo. And this was the reason for the fight.

As Birbal was busy stopping them, another person came up carrying a jar of ghee with him. “You are a fool to talk to these fools”, he said, and dropped the jar on the ground. The jar broke into pieces and the ghee ran out. The man said “May my bones break like the jar and my blood run like the ghee, if these two men are not fools”. Birbal now had a long list of fools as he added three more names and address.

A few days later, while coming back to the palace at night, he found a man searching something under the street light. He stopped and asked “Have you lost something?” “A ring”, answered the man, “Are you sure, you lost it here?” The man replied “No”. Birbal was surprised and the man informed that he had lost the ring somewhere there. But since it was dark there he was searching it under the light where he could see well. One more name was added to the list.

The next person on the list also had lost a ring. He was searching it in a heap of sand. Seeing this Birbal asked if he was sure that he had lost it here. The man replied that he had made a hole and kept it safely. He had also marked a sign so that he could easily find it. He had buried it under a cloud shaped like a camel. But now the cloud was gone and so was the ring.

Birbal had gathered the names of eight foolish people.

He visited the King and told the stories of each one of them. Hearing this, the King asked “I told you to gather ten people, but there is only eight.” Birbal replied that the ninth one was he himself for wasting eight days in doing such a useless thing and the tenth was the King for sending him to find fools and wasting his precious time.

So, all ten foolish people were on the list now.